Divali 2020: Exploring the built heritage of the Hindu Community

Home » Divali 2020: Exploring the built heritage of the Hindu Community 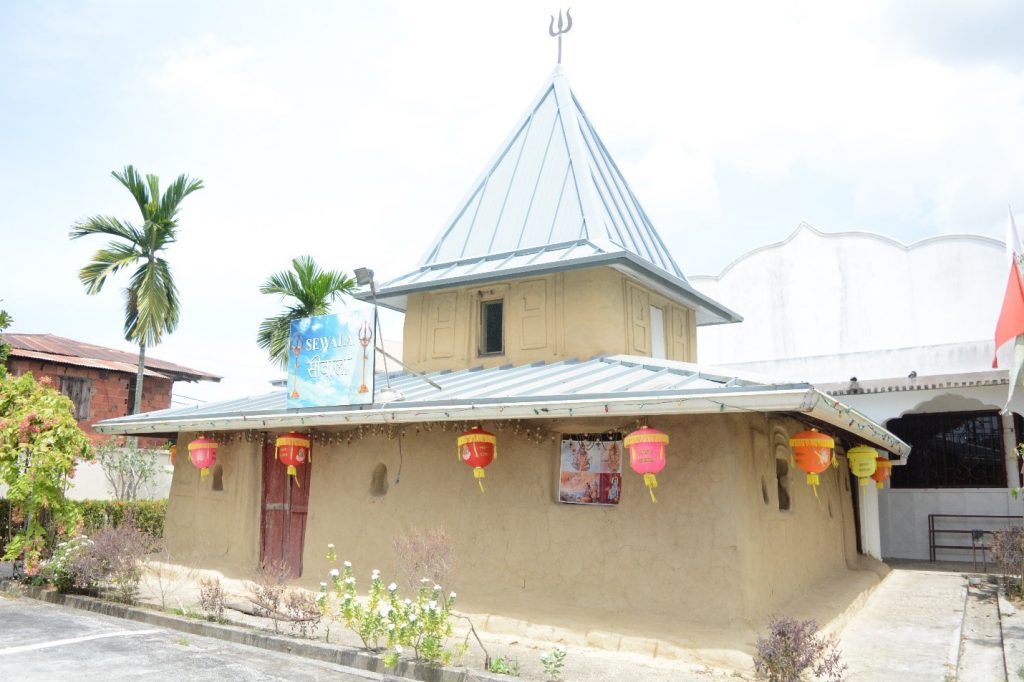 Trinidad and Tobago’s religious diversity is one of the most celebrated aspects of our cosmopolitan culture. Divali is in the air! Allow us to provide you with a brief “What is Divali?” refresher. In Trinidad and Tobago, Divali celebrations tend to focus on the Goddess Lakshmi. However, there is more to this Hindu celebration than meets the eye, ear or taste buds!

Divali is a five day festival, held in celebration of the return of Lord Rama, after he defeated the demon king Ravana. According to Hindu beliefs, Lord Rama successfully defeated the evil king Ravana of Lanka (also known as dark king Narakaasura), and rescued his wife from captivity (Origins of Divali, 2020). In the lead up to Divali, groups come together to do Ramleela, a dramatic re-enactment of the Ramayana which takes place for ten days. (Sambrano, 2019) Click here to read more about Ramleela, and check out the Trusts’ Ramleela inclusive tours here.

The Five Days of Divali:

Day 1: The Dhanteras stands as the official start to all the celebrations. On this day persons buy new items to bring luck and prosperity to their household.

Day 2: Naraka Chaturdashi (small Divali) takes place on the day before the actual festival and is believed to be the day Lord Krishna killed the demon.

Day 3: The third day is Divali which takes place on the darkest night of the year. During the day, houses are decorated with Rangoli, and worship is focused on the goddess Lakshmi and Lord Ganesh. As night descends, the deeyas are lit. Food offerings (prasad) are shared with friends and family- a celebration many look forward to. Modern celebrations include fireworks or artificial lights. In many parts of the country, the main roads are also decorated and food vendors serve delicious delicacies.

Day 5: The fifth day 5 is Bhai Duj, the day of siblings, where the bond between siblings is celebrated

The commonly known meaning is that Divali is about light over darkness; but it is important to note that it is not just the physical or visible aspects of light-and-darkness being referred to. The triumph of knowledge over ignorance; the triumph of spirituality (consciousness of God as the supreme light) and enlightenment are other aspects to take note. For 2020, we would like to take this opportunity to highlight the work of the Trust, by taking a look at the some of the built heritage of the Hindu community.

This temple was built in 1920 of mud and cow dung at the hands of indentured labourers who resided in the barracks adjoining the estate. Located in Couva, this one of the oldest standing temples in T&T. The walls of this approximately 100 year old structure are termite resistant and feature raised relief sculptures portraying several deities, making it unique to Caribbean architecture. Some pundits lived on the compound- the father of current pundit Hardeo Maharaj, was the last resident pundit. The sole alteration to the original structure is the addition of an aluminum roof installed in 1985. This temple was listed as a property of interest by the National Trust in 2019. 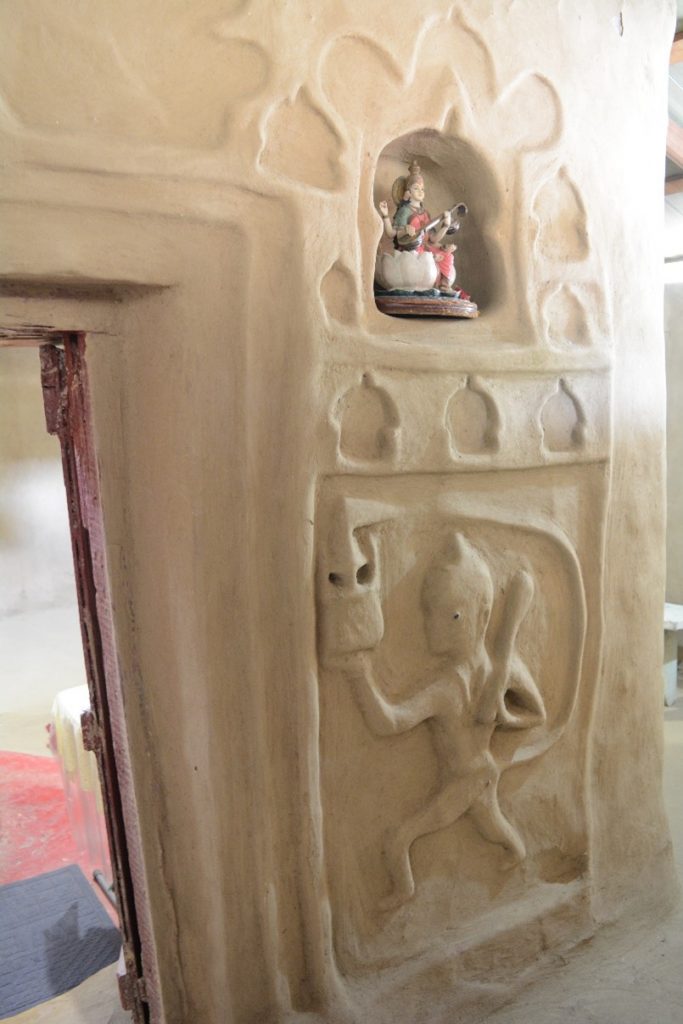 Raised relief in the interior of the Mud Mandir. Source: Kara Roopsingh, National Trust of Trinidad and Tobago.

Located in Gasparillo, this gem on Railway Road is an original historical building that was completed in 1945, but opened in 1946 on the night of “Maha Shivratri” (Great Night of Lord Shiva). The entire temple was constructed by hand, using sand and stone materials collected in buckets from the Guaracara River. The walls were hand plastered, featuring representations of Ganesh, Vishnu and Pravati. Without the use of modern tools, and being compelled by faith (Boodoo, 2012) to build their own place of worship, the Hindu forbearers, put in commendable work in creating this sacred site. In 2019, this Temple was added to the Trust’s listing of properties of interest. 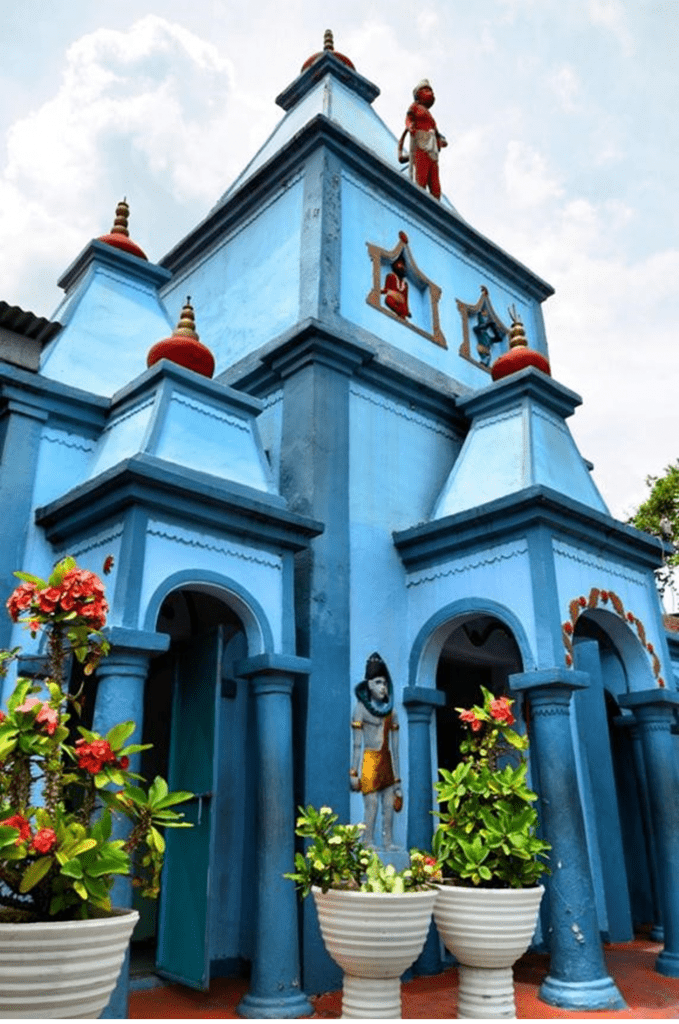 Photo of the Reform Village Shiva Mandir by Liam Boodoo

Off the coast at Waterloo, this temple is regarded as a sacred pilgrimage destination for worshippers. Originally built in 1947 on land, Siewdass Sadhu’s first construction had to be removed as it was in McMillan Park, which was private land belonging to Tate and Lyle Limited. He was even arrested after legal proceedings surrounding the construction of this structure. Nonetheless, determined to have the temple built, he turned to the sea and spent over 25 years carrying material- on his bicycle, from land to waters of the Gulf of Paria. His hard work is testimony to the strength of the human spirit. It is an essential ingredient when one considers that Divali is all about spiritual enlightenment. A pedestrian pathway takes visitors onto this man-made island. His vision now allows for members of his community have a safe place of worship, to practice and carry on their beliefs. 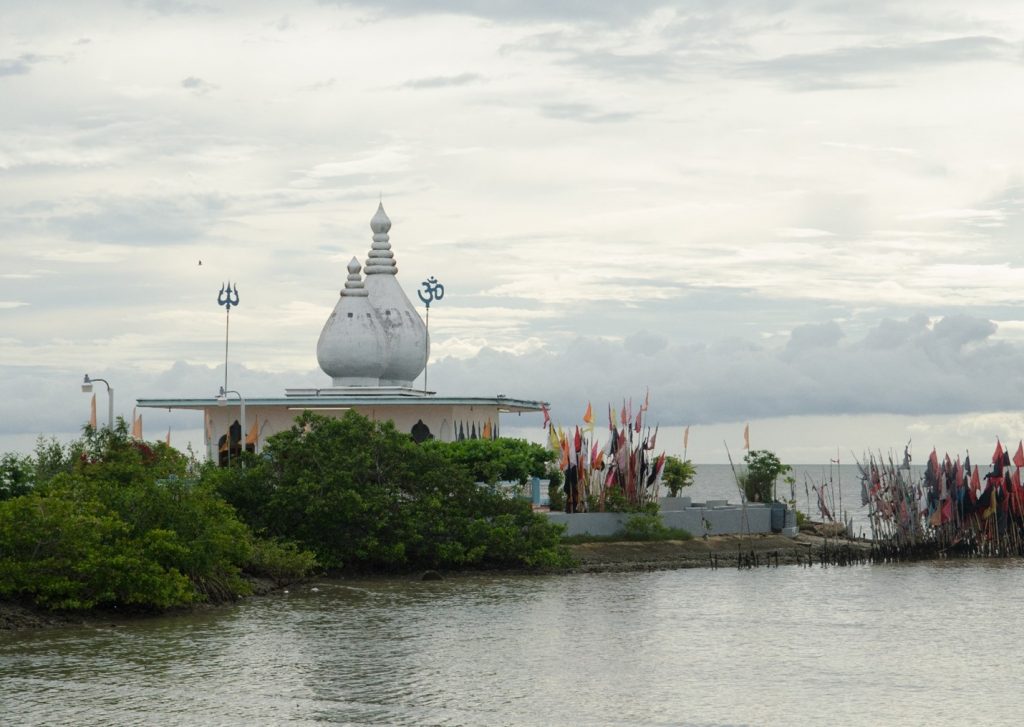 Located in Tableland, this is believed to be the second oldest temple built in the Western hemisphere. Manhant Moose Bhagat Dass was allotted land along the Naparima/Mayaro Road after his indentureship. While clearing the land, his blade struck a rock and blood flowed from it. In a dream that night the Lord Shiva appeared to him, instructed that a temple be constructed on the site of the bleeding rock- as this was actually Shiva’s resting place and therefore a sacred place. Work began in 1902 and was completed in 1904, with this temple being done in honour of Shiva. The stone that inspired this holy building resides with the temple (Fraser, 2013). 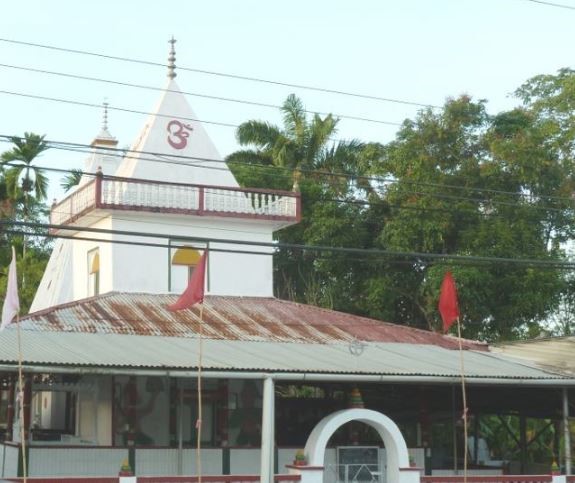 This is tangible heritage that provides us with linkages to intangible aspects of life in times gone by. The pioneers behind these sites demonstrated an incredible strength and resilience of the human spirt, not to mention courage in the face of adversity- qualities we come to understand when we are knowledgeable of the history of the buildings. Best of all, the safeguarding of these sites allows for current practitioners to operate in the same space as their forbearers, and walk in the same spiritual steps, held dear by the original creators. How amazing is it that Divali then and Divali now- the goal of enlightenment remains unchanged?  Shub Divali to Trinidad and Tobago!