Carerra is notorious for its use as a prison island. For this fact, it is arguably the most legendary of the Western Isles. The island was used to lodge those deemed (by many of whom were themselves violators of human rights) to be the most vicious criminals in society. 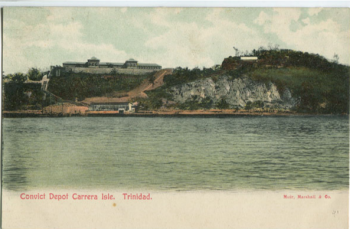 Convict Depot at Carrera in 1908

After the Emancipation of the enslaved in 1834, the authorities, with lessened powers of control, complained that there was a notable increase in criminal activity. Perhaps to insulate the (European) public from its fears, and to dodge the gaze of objectors of corporal punishment, it was decided that separation by water was the best way to penalise criminals. Here they were able to freely put into practice the concept of hard labour which was inscribed into English law via the Criminal Law Act of 1776. A permanent prison was thus established on the island in the 1870s where those convicted of crime were mercilessly punished for infractions of behaviour, made to live on meals of little nutritional value, and forced to engage in hard labour, including quarrying stones to be used as road metal. This kind of harsh treatment was thought to act as a deterrent to crime.

Before its use as as a prison depot, Carrera served as an auxiliary Ulcer Hospital to the Colonial Hospital, which had faced vast overcrowding. Due to its distance away from the populous city of Port of Spain and because of its open, airy nature, it was believed that Carrera Island could be used therapeutically for ulcer patients. This point of view was based on the Victorian belief that most diseases of the body were of miasmatic origin. Proving that the period of isolation was beneficial for ulcer patients, a legislative council member in 1866 stated that “patients who had been under treatment at the Island, have already derived a boost from the pure air and sea bathing.” That same year, Carrera was considered for use as an immigration convalescent depot for Indian arrival immigrants. However, the idea was rejected in favour of Nelson Island due to the facility being used to house five times the number of ulcer patients by the end of the year. 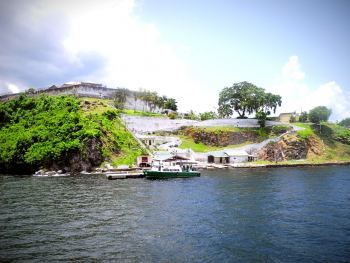 Despite plans by the government of Trinidad and Tobago to shut down the facility in 2013, Carrera remains a prison island today. The island still manages to strike fear into the hearts of many Trinbagonians who have heard the legends about its most notorious residents. Come join the National Trust on its Western Isles Tours where one can learn more about Carrerra as well as the other islands off Trinidad’s north-western peninsula. Visit our Heritage Asset Register on our website to discover our nation’s heritage and look out for part III of this series where we will continue our exploration of the Western Isles as quarantine islands.