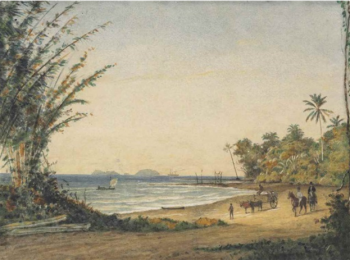 As Trinidad and Tobago deals with the effects of COVID-19, the population is compelled to familiarize itself with terms such as “social distancing”, “self-isolation” and “quarantine”. However, these precautionary activities are not new to the country. We can look to history to provide us with some not-too-distant examples of these and the measures adopted to deal with issues of public health and safety. Minister of National Security Stuart Young reminded citizens that then mayor of POS, D.W. Sutherland, debarred all public gatherings in 1918 to manage the obliterating effects of Spanish Influenza which took the lives of many Trinbagonians. There were many other times in our history where such an extreme measure was deemed necessary. This three-part series will explore some other occasions where quarantine or isolation was deployed with special focus on the Western Isles of Trinidad and Tobago.

From Mainland to Island: The Leprosy Problem in Trinidad 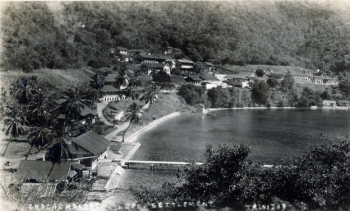 Like many other parts of the world, Trinidad had to contend with the scourge of leprosy. During the 1800s, lepers (for the most part) lived in relative isolation in Laventille. The area was already deemed insalubrious by the colonial authorities and was firmly avoided by those of European descent at all cost. To survive, lepers from Laventille were forced to come to the town of Port of Spain to beg putting the health of the general population at risk. Perhaps due to the authorities’ reluctance to traverse the hills of Laventille to keep the lepers permanently isolated, the leprosarium was transferred from Laventille to Cocorite in 1845.

A new wave of the pandemic hit Trinidad’s shores with the arrival of Indian indentured servants making the demand for new ways to treat with the disease more urgent. However, a cure for leprosy would not be developed until the latter half of the following century. Without treatment, and in need of volunteers who were willing to care for persons with leprosy, Governor Arthur Hamilton Gordon enlisted the help of the Dominican Sisters of Etrépagny, France who arrived in Trinidad in 1868. They would perform yeoman’s service well into the 20th century. However, despite their unselfish dedication, the numbers of persons afflicted with leprosy increased greatly. 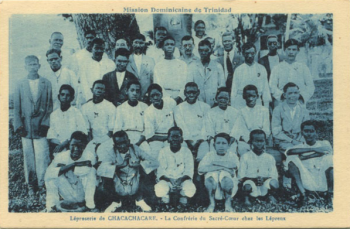 Men and boys with Leprosy at Leper Colony, Chacachacare circa 1920

By 1915, advances in medical technology confirmed that leprosy was highly contagious requiring complete isolation of patients from general society. In response, the Colonial Government enacted legislation requiring that persons with leprosy either stay confined to their homes or find their way to the Cocorite Leprosarium. Not wanting to be condemned to a life of isolation, many had to be taken to the Cocorite facility by force. Due to lack of social distancing in these times, the numbers of those afflicted with the disease rose critically rendering the Leprosarium unable to deal with the large volume of patients. Compounding the situation was the fact that over 300 patients absconded from the facility further endangering the population.

In 1921, the colonial government advertised that it was establishing a leper colony on the island of Chacachacare.  This was met with stiff objection by a vociferous elite who did not wish to see their loved ones living in further isolation. Concomitantly, others were outraged over the forced evacuation of Chacachacare dwellers to accommodate the establishment of this facility. Elite residents were forced to abandon ancestral lands and holiday homes. Others felt the brunt of the disruption of agricultural and fishing communities.

Due to the contentious nature of the proposed move to Chacachacare, the first day of transference in 1921 was done in secret. Needless to say, there was much wailing and gnashing of teeth. By 1926, all sufferers of leprosy were transferred to Chacachacare. Where the lepers went, the Dominican Sisters followed fulfilling their pledge to live out the rest of their days in service to the afflicted. Later, more people were brought on to deal with the large numbers of sufferers. Unlike the nuns who worked full-time, support staff worked on a two-week shift basis. 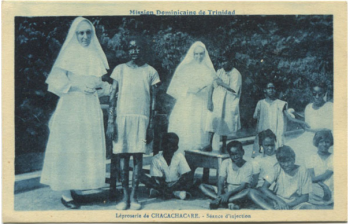 Dominican sisters with children afflicted with leprosy at Chacachacare

In terms of living arrangements, males afflicted with leprosy lived on Cocos Bay, while the females lived on Sanders Bay which also housed the administration facility. This arrangement (which was reversed in 1943) seemed to have moralistic overtones and was ostensibly done under the advisement of the Dominican Nuns. On the Western side of the island at Marine Bay were the convent, the chapel and the chaplain’s residence. Thus, there was, for some periods of the day, an area of distance between the nuns and those afflicted with leprosy. Two nuns (one originally at Cocorite and one at Chacachacare) had contracted the disease and lived in separation in a house at Sanders Bay.

By the 1930’s trials in medicine brought about measures to treat with the disease. However, only a small percentage of persons with leprosy were successfully treated and returned to mainland Trinidad   Despite these gains in medicine, many more died of the illness over the years. Fortunately, with further advancement in medicine and with a new programme of treatment developed by American specialist Dr. Richard Keeler in 1971, patients were able to receive treatment on the mainland. Patients were incrementally removed from the Chacachacare leprosarium and cared for in specialised facilities on the mainland. By 1984, the last patient left Chacachacare permanently closing its chapter as a quarantine island.

Today, Chacachacare is no longer home to a residential leper community but is a popular camping site for the adventurous. Aside from remnants of buildings from the leprosy era, including Doctor’s House, the chapel, and the nuns quarters, one can also hike to the Chacachacare Lighthouse, take a dip in the Salt Pond or one of the many bays that contour the snail-like landmass, and see the numerous (extremely poisonous) manchineel trees which inhabit the island. The National Trust does regular tours to Chacachacare and other islands of the Western Isles. Visit our Heritage Asset Register on our website to discover our nation’s heritage and look out for part II of this series where we will continue our exploration of the Western Isles as quarantine islands.