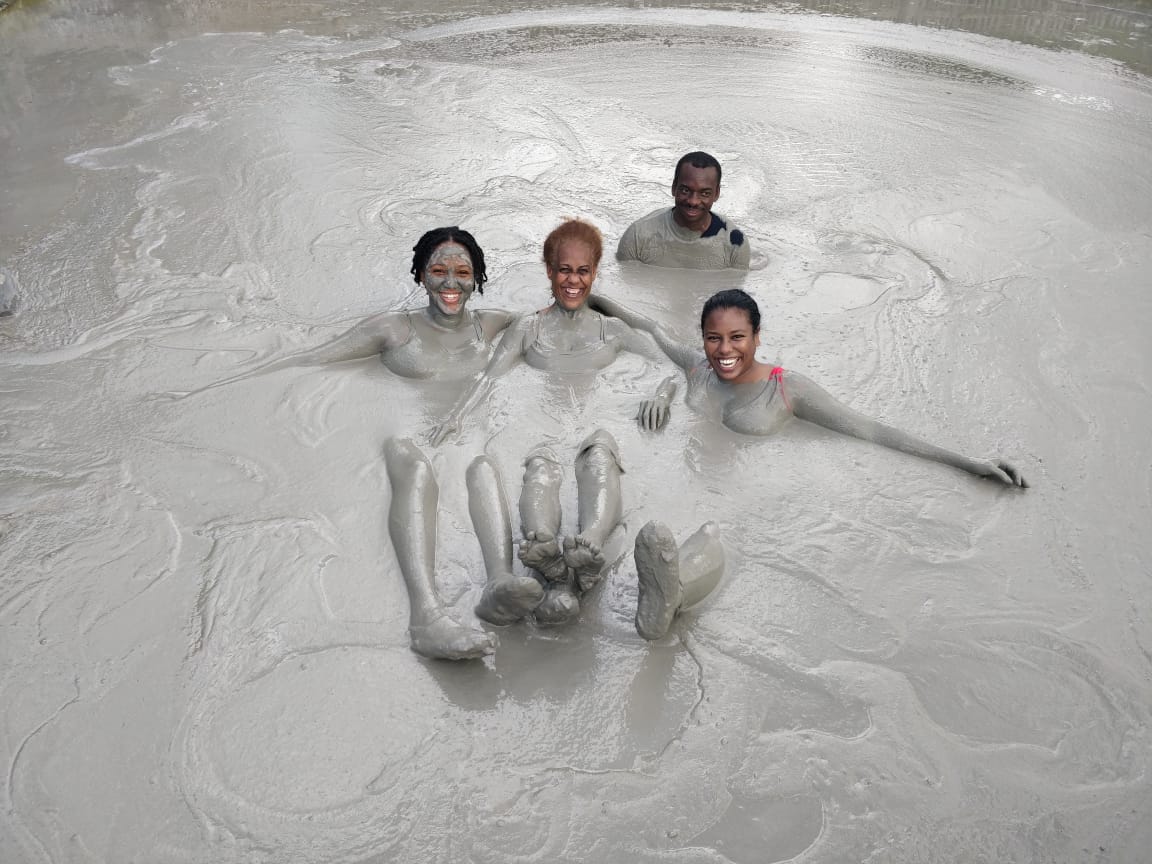 Have you visited the L’eau Michel Mud Volcano and felt the sensation of floating in that pool of mud and wondered, what is a mud volcano exactly? Or perhaps you have seen photos and wondered how they are made and where the mud is coming from? Well, according to The University of the West Indies (UWI) Seismic Research Centre, mud volcanoes are not actually real volcanoes at all. They are vents or fractures through which warm mud is emitted and are not as hazardous as real volcanoes (The UWI Seismic Research Centre). Mud volcanoes require leakage of natural gas from deep in the ground to the surface. When the gas is mixed with salt water, and a relatively soft clay type soil, the mud if formed. These geological features have little in common with real volcanoes which are on a much larger scale with very high-temperature molten rock or magma emanating from deep within the earth and reaching the surface as lava and which can be highly destructive. While Trinidad is not a volcanic island, it has the ideal unique conditions for creation and maintenance of mud volcanoes. Mud volcanoes “are generally encountered in areas where natural gas is present” (The UWI Seismic Research Centre). Trinidad has no less than 18 mud volcanoes which are located mainly in the southern half of the island in areas such as Tabaquite, Piparo, Princes Town and even the Nariva Swamp (Barr and Bolli, 1953). Interestingly, the south-western peninsula of Trinidad is littered with them, but there are no mud volcanoes in Tobago.

In Trinidad, while mud volcanoes are an interesting and mystical natural feature, they can also be strongly linked to our intangible cultural heritage. The Balka Devi Mud Volcano of the L’Envieusse mud volcanoes is one example. Here the Mother Balka or Balka Devi is revered and worshipped as a Goddess by Hindus (de Silva 2019). At the site there is a Mandir on the edge of the mud volcano and each year it brings Hindus in pilgrimage for a Balka Devi Festival under the auspices of the Hindu Festival Society. “Balka Devi Puja seeks to restore equilibrium in the inner earth so that people could be protected from the violent effects of earthquakes, volcanic eruptions, tsunamis, and fires” (de Silva 2019). The site is open to visitors via bookings and the National Trust has conducted public tours to the mud volcano where curious patrons were able to touch the mud, discuss the religious significance of the site with the devotees, and contribute to the maintenance of the property. There are many more mud volcanoes in the L’Envieusse, Columbia Estate, San Quintin Estate and Cedros areas. These distinctive features of our landscape are part of Trinidad’s Geoheritage. 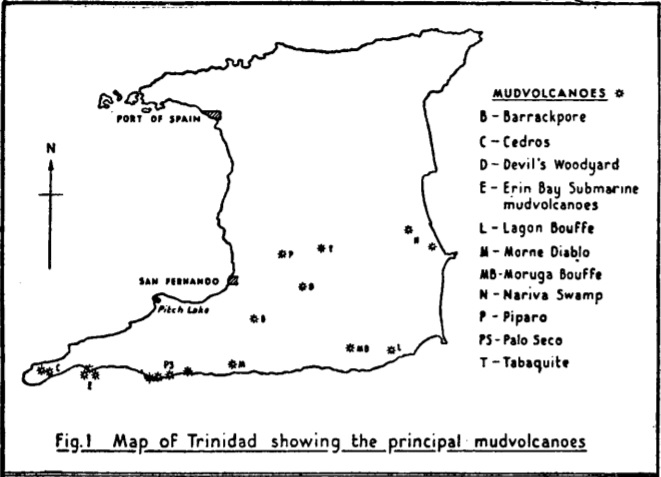 Map of Trinidad showing the location of mud volcanoes. Source: (Barr and Bolli, 1953)

Geoheritage comes from the term ‘geological heritage’ and it is part of the natural heritage of a certain area made up of different geodiversity elements with particular geological value (ProGeo 2017). “Geology is the study of the Earth, the materials of which it is made, the structure of those materials, and the processes acting upon them” (King, 2020). Some examples of our geoheritage include mud volcanoes like the L’eau Michel Mud Volcano or Devil’s Woodyard, fossils, such as those in The University of the West Indies Zoology Museum and National Museum and Art Gallery, our caves, such as Gasparee or Tamana cave, and the Pitch Lake.

The heritage of Trinidad is often discussed within three main eras: pre-Columbian (prior to 1492/before Christopher Columbus), colonial (1492-1962) or post-independence (after 1962). However, the reality is much more exciting, as sites have been documented to be between 100 million and 250 million years old (Mesozoic era), including sites from the Jurassic on the geologic timescale (see graphic below for where these eras fall on the timescale). In layman’s terms, our island of Trinidad is potentially hundreds of millions of years old. Talk about heritage! To better put this into perspective, consider that Iceland is the youngest geological country in the world and was formed only about 16 to 20 million years ago. The island of Trinidad is much older, and the island has many more stories to share from long before those time periods. This unique aspect of our heritage offers insights into the evolution of the earth and the land mass we call Trinidad. 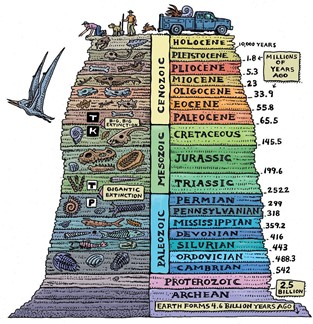 Mud volcanoes can help the economy!

As an oil rich nation, we have long depended on the natural environment for our social and economic development. These sites can contribute further to our development in scientific, educational, economic and sustainable ways. Geo-tourism for example, is a well-integrated tourism product for some countries with accessible geological features. This is the use of geological features as tourist attractions, such as hot springs or volcanoes, which ultimately bring revenue to a country. A regional example of successful geotourism can be found in St Lucia. The Sulphur Springs in the Soufrière Volcano are a revenue-generating tourist geo-attraction as the only drive-in volcano in the world, along with the popular experience of the natural therapeutic properties of the mud baths. The La Soufrière National Park is also a globally recognised UNESCO World Heritage Site. Locally, entrepreneurs like Catty Asaveria-Snaggs are using the therapeutic and restorative properties of the mud to create a thriving business in natural skin care products with a special line of face and body masks made from the mud from the volcanoes in Rancho Quemado, Palo Seco. She is the owner of Mitsu Cre8tiv Spa, based on Adventure Road in Point Fortin and has turned the mud volcano’s mud into an integral part of her thriving business inclusive of products that have received glowing customer reviews due to the mud volcano’s natural mineral content. Learn more about her inspiration and journey with the mud volcano. 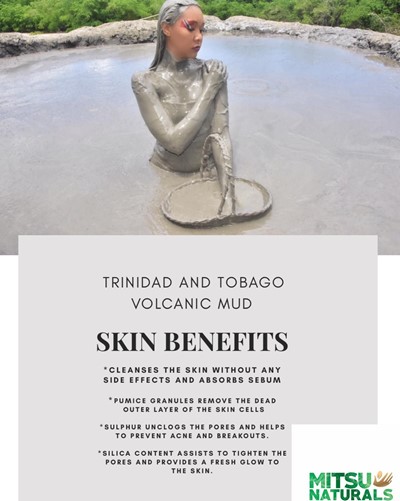 We have a resource here in Trinidad that is not commonly found in many countries. The opportunities are endless, and there is so much more to discover about these beautiful sites. Geological features can be a fun-filled local and foreign tourist attraction, and at the same time contribute to the future well-being of societies and the economy.

What else can Trinidad’s geoheritage teach us? Join the Trust for more articles in this series on our Geoheritage sites. Let us know which geological sites you have been to with the National Trust and share your tour experiences with us! 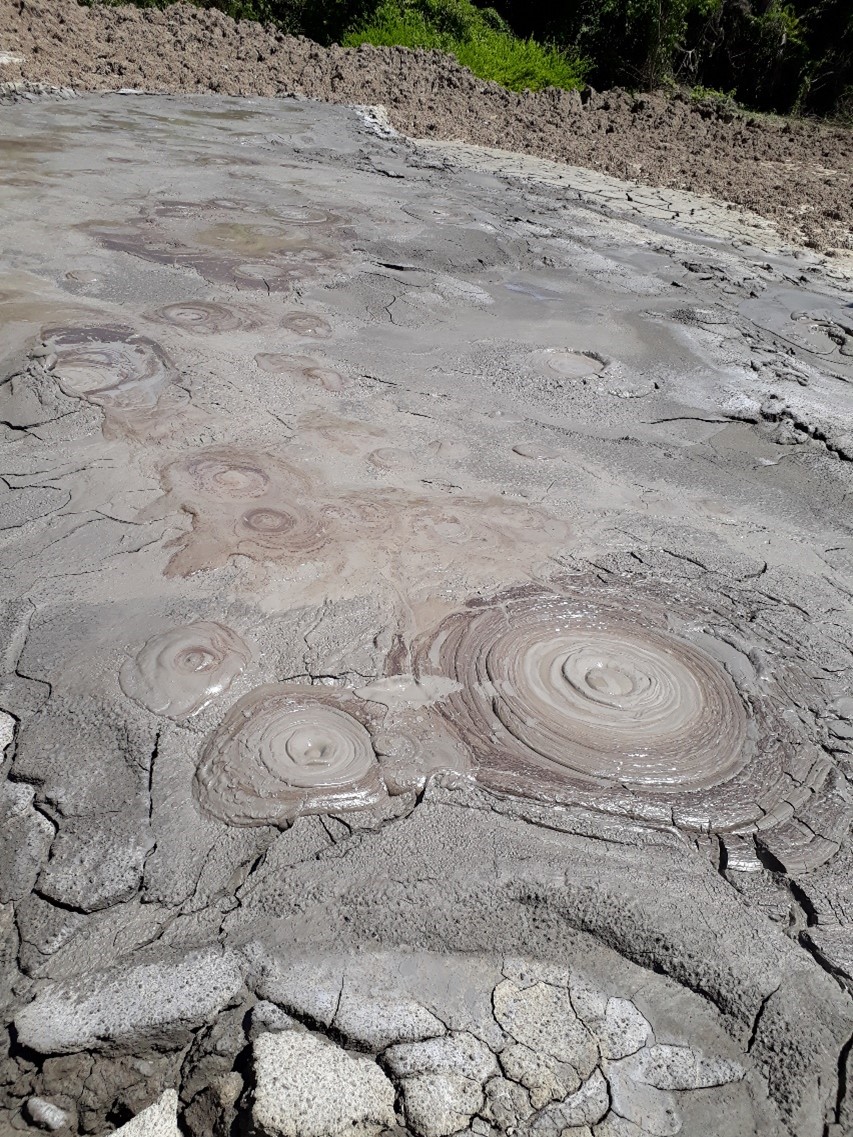 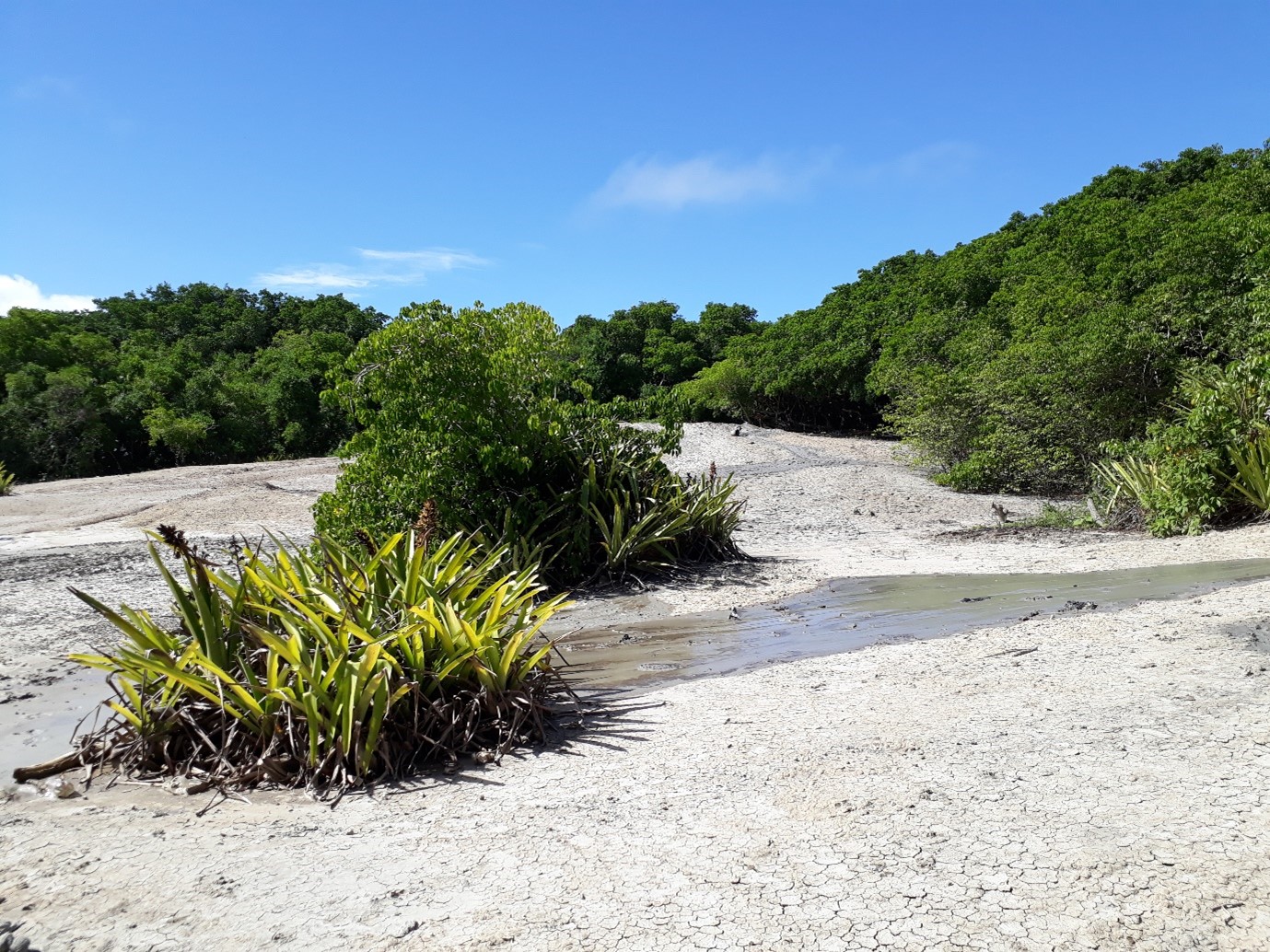 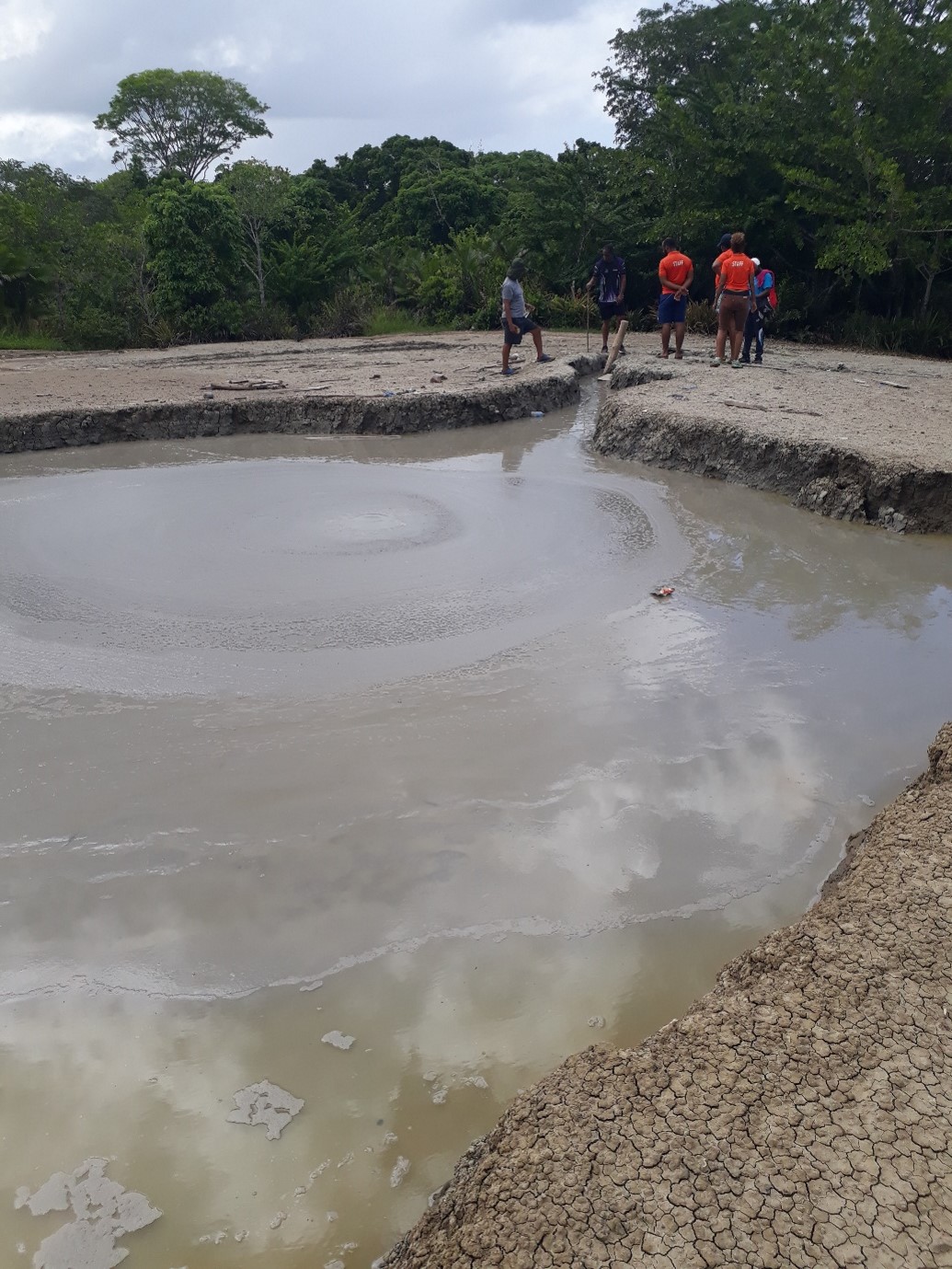 About the author: Kara Roopsingh is the Senior Heritage Preservation and Research Officer at the National Trust of Trinidad and Tobago. She is a tree-hugger-ocean-lover but has a passion for old bricks and historic architecture. She enjoys uncovering the stories behind old buildings, natural spaces, communities, and places.

ProGeo (2017) Geodiversity, Geoheritage & Geoconservation.  The European Association for the Conservation of the Geological Heritage. Link: https://www.iucn.org/sites/dev/files/progeo_leaflet_en_2017.pdf

The Geological Society of Trinidad and Tobago https://thegstt.org/events/article/100

Categories: Blog - Other Contributors
Tags:
← Deeyas and Divali Traditions All About Toco →

Kara Roopsingh
Kara Roopsingh is the Senior Heritage Preservation and Research Officer at the National Trust of Trinidad and Tobago. She is a tree-hugger-ocean-lover but has a passion for old bricks and historic architecture. She enjoys uncovering the stories behind old buildings, natural spaces, communities, and places.