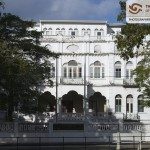 One of the Magnificent Seven, White Hall, originally called Rosenweg, the largest of the private homes on Maraval Road, was built in 1904 by Joseph Leon Agostini, a cocoa planter. Construction commenced in 1904 in accordance with Mr. Agostini’s own design, influenced by a Moorish Mediterranean style and reminiscent of the architecture of Corsica from where the Agostini family originated. Construction took three years.

After J.L Agostini’s death in 1906 his family remained in residence until 1910. Unable to meet mortgage payments, the mortgagee, William Gordon Grant, foreclosed. The property was then sold to Mr. Robert Henderson, and American businessman from Venezuela. During his ownership, a delightful variety in the furnishings of the interior was added to the refined dignity of the exterior. The Henderson family renamed it White Hall after the coral stone from which it as built.

During the Second World War, with the arrival of the United States Forces to Trinidad, White Hall was commandeered from the Seigert family, heirs of Robert Henderson, as headquarters of the Air Raid Precaution. In 1944, the British Council rented the building as a cultural centre. Later, the Trinidad Central Library, Regional library, National Archives, Government Broadcasting Unit, Trinidad Art Society and the Cellar Club all rented or occupied space in the building. From 1949, the building remained empty until 1954, when it was purchased by the Government of Trinidad and Tobago. 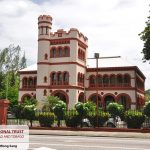 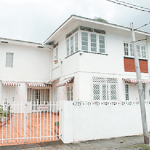