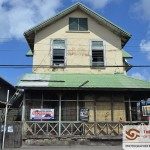 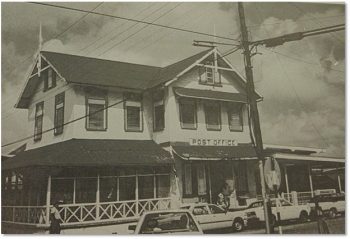 The Old Post Office at Sangre Grande may not look it but is one of the oldest buildings within a quarter-mile radius of the Police Station. And it appeared on the scene even before the Police Station, being one of the very first public buildings in Sangre Grande. Sangre Grande was then a little village known as Cunapo. It is the area in the centre of the old Cunapo that the oldest buildings in Sangre Grande can be found. Almost all the old buildings in that area have now gone; some destroyed by fire, others by the sheer passage of time, and the area itself, apart from the roadways, has been transformed. The building under review, undistinguished and ill kept, has weathered the storm of many hectic days, for the Sangre Grande railway station is just next door. Indeed, this post office building was erected in the year after the railway came to Sangre Grande – 1898. It became suddenly lonely, hearing neither the whistle nor seeing the usual bustle when the Sangre Grande line of the Trinidad Government Railways was cut off in 1954. The grand and wonderful railway terminus, which was a station drawing not only the people from Sangre Grande but from the entire east of Trinidad, had made Sangre Grande special, and the Post Office beside it gave added prestige. When they started to build the Police Station in 1901 – a station that was demolished in 2005 and replaced on the site of the old one – Sangre Grande became a veritable star of the east. The reason for this was simply because there were no proper roads leading from Sangre Grande to Arima and Port-of-Spain, or to anywhere for that matter, at that point of time. Nor had motor vehicles come on the scene. For we are referring to the period 1898 to 1901, and proper roads followed by motor vehicles plying for hire had to await the 1920 decade. And people from the area could not travel by sea, because Cunapo – to become Sangre Grande – was not on the coast. When the Trinidad Government Railway came to this region it was the first time crowds could get on the train and ride into town. So one could imagine how significant a Post Office can be at such a place and at such a time. The people of Cunapo depended on this Post Office. But they could never have known it was going to remain functioning for a hundred years, and although its postal business has recently ceased, this building is still standing and perhaps has not yet come to the end of its day. Copyright NALIS, 2010 Property of interest comprising 3,861 square feet of land and bounded on the north by lands occupied by the Sangre Grande Regional Corporation, on the south by the Eastern Main Road, on the east by River Street and on the west by No. 69, Eastern Main Road, Sangre Grande.

Grade: Grade 2 – property in which material change may be permitted, provided that similarity is maintained in all respects as it origined composition, shape and form; 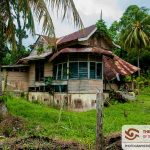 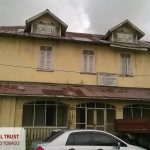