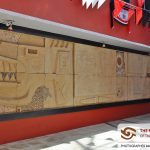 Carlisle Chang’s “Conquerabia” is a mural primarily cast in cement with other added materials located outside the Port of Spain City Hall. Conquerabia is believed to be the original name of the Amerindian settlement that preceded the Spanish city, but in many ways the mural sums up Chang’s vision of the entire country. It epitomises, too, his vision of its art, in its symbolism, its style and even the materials used in its construction. The central panels of Conquerabia are enclosed between depictions of the gaping mouths of the Dragon and the Serpent — the names of the two passages which close off the Gulf of Paria, between Trinidad and Venezuela. A Spanish caravel is seen approaching the three Trinity Hills, on the south coast, after which Trinidad is named.

The artist included Amerindian motifs as well as images that embody the diverse racial and architectural elements of the modern city. There are also religious images, in a reference, Chang explained, “to the remarkable tolerance which has always characterised the life of Port of Spain”. And in his quest for new and durable materials, Chang found a way to incorporate literal emblems of every corner of the country. The four panels include, among other things, grey and white stones from Sans Souci on the north coast, multi-coloured porcelainite from Erin in the deep south, and a green stone from Tobago. 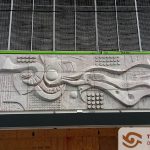 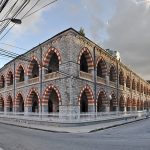