Locales of the 1937 Labour Revolution

In 1921, Uriah ”Buzz”  Butler landed in Port of Spain, attracted by the booming oil industry and the need for escape from the harsh conditions in Grenada as a result of the First World War. He had served in the British West India Regiment and was based in Egypt and Palestine. His brother worked in the Oilfields in Trinidad and his former Captain in the war, Captain Arthur Andrew Cipriani was leading a movement for the labourers. Butler became one of his Chief Lieutenants in 1935. He resided in Fyzabad and got employed as a Rigman on the Apex (Trindad) Oilfields whilst working alongside Captain Cipriani in the Trinidad Labour Party.

Butler felt disenchanted with the conditions he was met with on his return. He and other returned soldiers had risked their lives for their country and now they were living in squalor. Working at Apex Oilfields, Butler felt the inequality was deliberate as the oil company had been successful, yet the wages the labourers received were what he called “starvation wages” and they had to settle for horrifying living conditions.

Fed up of what he considered feeble attempts at change thus far by his former Captain Cipriani, he left the TLP and formed his own labour party which took a forceful stance for the oil workers. He also personally addressed the Managing Director of Apex, Colonel HCB Hickling, who represented oil in the government as well, demanding better conditions for oilfield workers and higher pay. On March 1935, Butler led a hunger march from Apex Oilfields to Port of Spain for worker’s rights, making him the face of the working class movement.

Butler had organized a follow up strike with Apex workers that was originally tabled for June 7th 1937 and authorities readied themselves for the uproar, however, they were underwhelmed as it never occurred. The strike was also rumoured to occur on June 21st, and in an attempt to squash the strike before it started, armed authorities headed to the South to confront workers, leaving Butler no other option than to move earlier on June 19th. Workers at Apex Oilfield engaged in a sit down strike downing all tools and operations and word spread by the workers which led to all the oilfields coming to a halt. 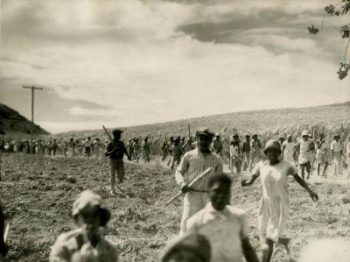 On the evening of June 19th 1937, Butler intended to hold a meeting to address the workers but as the workers approached the gates of the Apex Oilfield, shots were fired by the Volunteer Company, at the unarmed strikers. A melee ensued between strikers and police. Police Corporal Charlie King, in his attempt to arrest Butler, was chased and thrown from a shop window. He broke his leg when he landed and lay immobile on the ground as the mob poured paraffin on him and lit him on fire at Fyzabad Junction (now called Charlie King Junction).

There was widespread availability and use of arms by protesters during strikes at this time as no regard was given to the legality of these firearms. Thus, the police were outnumbered and outgunned in this moment. Fourteen people were killed, fifty-nine were wounded and hundreds were arrested in this horrific scene. Reinforcements were sent in under Inspector Bradburn to retrieve Corporal King’s body. Bradburn was shot and killed and the police were driven out of Fyzabad. A statue now stands outside the Oilfield Worker’s Trade Union Office on Charlie King Junction to honour the late Butler. 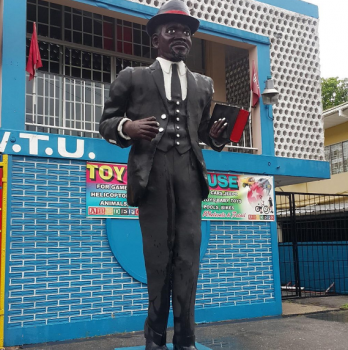 Moments after the riot on Fyzabad Junction, chaos spread throughout the country. British Marines landed in Trinidad from the H.M.S. Ajax and the H.M.S Exeter. The naval reinforcements collaborated with the internal authorities to quell the riots on various oilfields as well as to hunt through house to house search parties for the “hidden” Butler who was swept away during the chaos. Strikers and ringleaders were arrested in the hundreds at this time. On June 21st riots spread to Point Fortin, San Fernando, Penal, Ste. Madeleine, Waterloo, Woodford Lodge, Port of Spain, Rio Claro, Dinsley Village, Palo Seco, Sangre Grande and other areas. Officials and staff were attacked at the Ste. Madeline Refinery Company and the following day Waterloo estate was raided and a mob attacked with pieces of iron, cutlasses, sticks and stones. Later that day, there was rioting in Port of Spain, Tabaquite and Rio Claro. Five people were killed in Rio Claro with 19 injured adding more loss of life to this labour crisis. 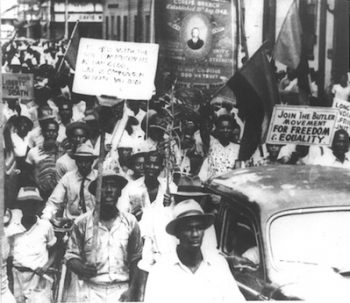 The essence of this revolutionary movement birthed the Oilfield Workers’ Trade Union (OWTU) on July 25th 1937. It was formed to bring organization and empowerment to the working man. A warrant was out for Butler’s arrest causing Butler to remain in hiding, however he designated Adrian “Cola” Rienzi to lead in his stead. Butler surrendered himself on September 9th 1937 and went before the court to be tried for sedition. He was cleared of the charge, however he was jailed for two years under the charge of inciting a riot.

Two years later Butler was released from prison and welcomed back with honour to the OWTU. He was, however, subsequently arrested and detained on May 1939, as he was declared a risk to the state during World War II. Butler was taken to Nelson Island to spend six years in a cottage near the water’s edge on the island until the War ended in 1945. He did not spend his sentence alone as German and Austrian immigrants were detained on Nelson Island at the same time because the authorities considered them enemy aliens. The men and boys were kept on Nelson Island and the woman were kept on Caledonia close enough that they would have been able to see Butler sitting in his rocking chair. The cottage was named Butler’s Cottage and a replica of the original building survives on Nelson Island which is a National Heritage Site under the National Trust.

The National Trust of Trinidad and Tobago wishes to remind the Nation of the rambunctious history buried in these various historical places scattered across our country. Grenadian born, Uriah “Buzz” Butler, came to Trinidad to add to the movement started by Captain Arthur Cipriani and ignited the nation in revolution. On this day, June 19th1937, Trinidad was turned upside down and Butler was the charging force behind the improved rights for the working class and the rise of other notable Labour Parties and leaders.

National Trust of Trinidad and Tobago