“A people without the knowledge of their past history, origin and culture is like a tree without roots.”

Contested heritage refers to heritage where there are multiple and competing histories; often one history is selected over others. Across the world colonial rulers wrote the histories of the places that they conquered, often making themselves the heroes who brought civilization while the locals were described as backward and savage. The Caribbean is no different. Different types of colonialism have existed in the Caribbean and as a result Caribbean heritage, Caribbean culture and the Caribbean itself have been depicted in multiple, often contradictory ways. Across the world postcolonial nations have struggled to find balance when deciding what heritage to preserve. This year, 2020 has rekindled the conversation in Trinidad and Tobago once again.

The theme for World Heritage Day which was on April 18th, 2020 was Shared Heritage. Shared heritage includes the contested heritage spaces around us with negotiated meanings and interpretations. (To read the National Trust’s blog on Shared Heritage you can visit the website here: https://nationaltrust.tt/shared-heritage/) Across Trinidad and Tobago and the wider Caribbean there are numerous spaces which have shared  and contested heritage. Sites associated with slavery, i.e. the remains of the plantations and the factories, where the enslaved were brutalized but endured, are examples of this. In Trinidad and Tobago as in many Caribbean islands however, former plantation properties have been converted into places of leisure for tourists (local and foreign). There is little to no onsite acknowledgment of the atrocities that took place on the plantations because this does not align with the representation of the islands, as tropical paradise. Locals and foreigners alike relax by the hotel pool and play golf on the manicured lawns and guests can have lunch in the remains of a sugar factory. The discussion of the atrocities committed on the plantations barely skims the surface of the issue.

This representation completely disregards the legacies of the plantation, which is a reality of life for many citizens of Trinidad and Tobago and the Caribbean. This is why the interpretation of contested heritage is important. Several questions are raised from this discussion.  Would an authentic depiction of the plantation make people, visitors and locals, uncomfortable? Would people identify with it and learn from it? How should this topic be approached? Notably, there are several countries in West Africa where Slave Castles, where the enslaved were imprisoned before shipping them across the Atlantic, have become significant heritage sites.

Another aspect of contested heritage in Trinidad and Tobago is seen in the names of places. The colonial officials and slave owners left their mark on Trinidad and Tobago. Thomas Picton was the first British Governor of Trinidad, after the British forces took Trinidad from the Spanish in 1797. There are several places in Trinidad named after Governor Picton. However, this was not his only legacy. He was a brutal ruler who inflicted extremely harsh punishments on anyone he found guilty of disobeying him. He utilized Spanish colonial laws to torture people. He tortured a coloured girl named Louisa Calderon who was 13 or 14 years old; an incident which led to a trial in Britain. The type of torture used was thereafter referred to as ‘Pictoning”. 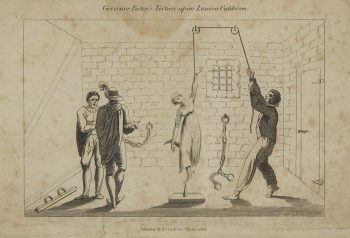 Picton however became a celebrated British war hero who died in the Battle of Waterloo in 1815, where Napoleon Bonaparte was defeated.  There are statues and paintings of Picton in public spaces in the UK. The debate over public representations of Thomas Picton is very much alive in Britain today. See more about it here: http://www.guardian.co.tt/news/uk-campaign-for-removal-of-memorials-to-sir-picton-6.2.1132470.048fbad238

Another historical figure who left an audible mark on Trinidad and Tobago was Count de Lopinot. Lopinot’s estate was named La Reconnaissance but today the village and the historical complex is named after him. Lopinot was a slave owner who according to oral tradition, hanged his slaves from a tree on the estate. After his death however a tradition developed of referring to him as a ‘benevolent’ slave master. These are only a few examples of historical figures whose names are popular in Trinidad and Tobago who did not have a positive past. There are many more examples which can be found across the nation.

The COVID-19 pandemic and the Black Lives Matter movement in 2020, have called for self-reflection and increased scrutiny of heritage. The interpretation of history and the expressions of heritage are being questioned everywhere.  What does heritage mean to you as an individual and as a citizen of your country and the world? As a postcolonial nation there are numerous aspects of our lives that are still affected by colonialism including our legal system, our educational system, our healthcare system and more. How we choose to remember the past and how we choose to move forward are the critical issues of today.