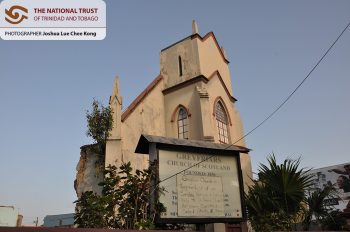 On the 1st August 1985, to commemorate the abolition of slavery, the Government of Trinidad and Tobago declared Emancipation Day a national holiday. On this Emancipation Day, we take a brief look into one of the important sites for the Anti-Slavery movement in Trinidad, the Greyfriars Church of Scotland.

The first Presbyterian mission to Trinidad began with Reverend Alexander Kennedy, of Greyfriars, in Glasgow, Scotland. He arrived in Trinidad on 25th January 1836 to begin a Church of Scotland (Presbyterian) mission to the Scots, British and the newly emancipated Africans. At that time, several other denominations had buildings in Port-of-Spain; the Roman Catholic (Cathedral of the Immaculate Conception), Church of England (The Cathedral Church of the Holy Trinity) and the Wesleyan chapel (now called Hanover Methodist Church). He was a young Minister, newly ordained only 4 months prior to his arrival, but dove into his new role delivering sermons one week after landing (Franklin, 1910). Reverend Kennedy made the strategic move to build a church in Port-of-Spain when he located an available plot of land opposite Brunswick (now Woodford) Square. He purchased the Frederick Street site for £300 from the Cabildo (Town Hall) and laid the foundation stone in April 1837 (Bissessarsingh, 2014). Construction of the first Presbyterian Church in POS, Greyfriars, began on 10th April, 1837. The first service was held on 10th January 1838. It then opened under the name of Greyfriars on the 25th January 1838. This historic building endured over 176 years and became an integral part of the cityscape of POS.

Under the leadership of Reverend Kennedy, Greyfriars Church played a strong role in the anti-slavery movement in Trinidad, something that would have surely stood out in the colonial society.  He became immersed in philanthropy where he created many friendly societies, established five mission stations, and became the President of the Trinidad Auxiliary Anti-Slavery Society. The first public meeting of the Trinidad Auxiliary Anti-Slavery Society was held at Greyfriars Church on the 1st August, 1839 in commemoration of the first anniversary of general Emancipation (Franklin, 1910). He remained the Pastor of Greyfriars for fourteen years and was described as “an able, earnest and most faithful preacher of the Gospel, and as the un- swerving friend of the poor and the oppressed” (Franklin, 1910). However, while he denounced the apprenticeship system as an ‘outrageous injustice’ he was known more as a peacekeeper with a strong moral stance, than as a revolutionary. 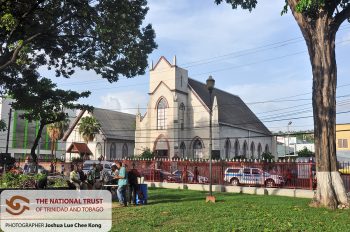 Greyfriars Church prior to demolition 2014

The activities of the congregation were viewed as progressive for its time. The church supported and “welcomed people of different races and religions to worship and even to get married, all at a time when interracial marriage was taboo” (Lu, 2014). The Church continued to help the poorest and lowest classes of Trinidadian society in the post-emancipation era. Successive waves of immigrants were brought to Trinidad as labourers but proper systems for integration and education were lacking. Greyfriars Church maintained a school at the manse and embraced and supported the Indentured Indians, Chinese and the Portuguese-speaking Madeiran immigrants. Reverend Kennedy was a huge advocate of education for the masses during a time when education was a privilege and not a right. Another great achievement of the church in 1842, was the creation of the Greyfriars Congregational Library. This was the first public library in Trinidad where membership was not restricted to members or seat-holders of Greyfriars Church (Bissessarsingh 2014). It is important to remember that this was in the context of colonial society, where every excuse was used to prevent non-white races and the lower class from accessing any type of education or information that could potentially upset the social order.

Despite this long history of liberal and humanitarian acts, the congregation of Greyfriars dwindled over time which forced the Presbyterian Ministry to concentrate their revenue on St. Ann’s Church on Charlotte Street. Sunday worship continued in the respective church halls, until 2009, when joint worship services began to be held at St Ann’s hall. The Greyfriars property, which contained the manse, church, and graves of three young children, was desanctified and sold to a private developer in 2014. The body of two year old Margaret Tannahill, (the daughter of Reverend Kennedy) was buried on 20th November, 1842 in the yard of Greyfriars (Franklin 1910). Once the public was made aware of this sale the objections came in from prominent historians and concerned citizens. Despite petitions and many protestations, demolition began on November 9th 2014 and continued again on November 30th 2014. These actions rallied the efforts of the NGO Citizens for Conservation, the National Trust and the Port-of-Spain City Corporation, but the final section of the Church was completely demolished in April 2015. The site now contains a parking lot. (See more about the demolition here and here ) To protect important historic sites in the future the Government of Trinidad and Tobago declared eight sites surrounding Woodford square as the Woodford Square Heritage District on December 18th, 2014. This was the first of its kind where the area will now be subject to Town and Country Planning spatial planning guidelines for heritage districts and development. The example of Greyfriars Church underscores the significance of heritage districts as part of the goals to make cities and human settlements inclusive, safe, resilient and sustainable, which is an important part of the UNDP (United Nations Development Programme) Sustainable Development Goals. 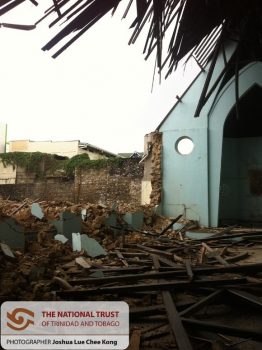 Photo of the demolition of the Greyfriars 2014 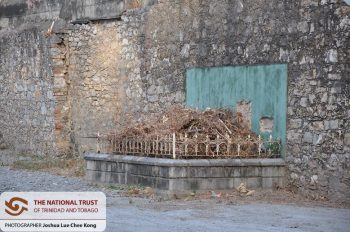 Photo of three child graves in the Greyfriars Church compound. The plaques were removed prior to demolition.

In 2020 we are challenged to be more conscious of the historical narrative we chose to preserve and promote for future generations, especially sites and monuments pertaining to slavery. Yet, this site of outstanding value to the anti-slavery movement in Trinidad was demolished and forever removed from the cultural landscape. However, five years after the destruction of this site, there are many lessons still to be learned from the Greyfriars’ story. There are various buildings and sites with overlooked, contested or untold stories in Trinidad and Tobago. What sites do you pass every day in your community? Do you wish to know more about it? Even though this was a tangible site, the historical and social importance was critical to the nation.

Our built heritage is a non-renewable and ever diminishing resource. It is simultaneously the most vulnerable and most visible aspect of our shared cultural identity. Some may argue that stronger laws are required for the protection of tangible heritage. However, until that time the National Trust remains an advocate for education about our heritage and continues to provide information that can assist persons in making more informed decisions.

There are several reasons why buildings should be repurposed instead of demolished. Persons are often encouraged to keep an open mind in reusing and recycling buildings. Moreover, a heritage building is a greener option, as one that is already built will not contribute to environmental degradation the way new construction does. Recent global trends have seen historic religious buildings repurposed in new and interesting ways. As the size of some congregations reduce and religious organisations are forced to sell or rent, we are seeing concert halls, theatres and even restaurants now occupy these once consecrated spaces. Examples of this type of adaptive reuse can be seen all over the world in some of the most inspiring and creative designs (Click here for some global examples). Repurposing these old buildings allows for the retention of the historic character of our city, breathes new life into downtown centres, while simultaneously creating a space for reflection and remembrance.

Bissessarsingh, Angelo (2014) The Greyfriars story Death of a Church. http://www.classifieds.guardian.co.tt/lifestyle/2014-09-06/greyfriars-story-death-church-%E2%80%8Bpart-2

Franklin, C.B. (1910) “After Many Days”: A Memoir. Published under the auspices of the Session of Greyfriars Church, Trinidad.

Church of Scotland in Trinidad and Tobago (Scottish Presbyterian) http://www.churchofscotlandtt.org/