Growth of the Peasantry

The post-emancipation period saw the rise of the peasantry in the Caribbean. Farming and trade were business opportunities for formerly enslaved people. In Trinidad, the cocoa industry boomed as result of the peasantry from 1870 to 1920 due to many squatters exporting coffee and cocoa. The peasantry consisted of freed Africans who engaged in mono crop cultivation on their own land and other activities such as fishing, shop keeping, huckstering, and estate labour to fuel economic gain so it did not solely rely on agriculture for its growth and subsistence. 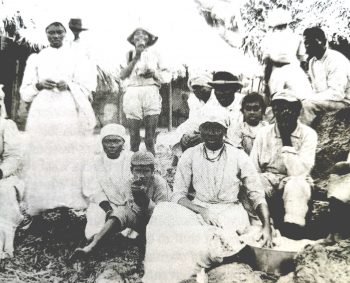 Upon leaving the plantations the freed Africans who migrated to the hillsides towns and villages or lands near the estates built up their own communities after emancipation with churches, markets, schools and local cooperative movements.  The peasantry achieved great success in its time as it produced various crops. Cane farming became a popular crop in the West Indies as in 1896, fifteen percent of sugar production by factories was supplied by farmers and it climbed to forty-nine percent by 1929. Prosperity spread through the peasantry amidst the opposition and lack of assistance by the Colonial officials.

The Struggle for Independence in Tobago

Tobago, unlike Trinidad, had large plots of infertile land with a low population density. After emancipation in 1838, squatting and land ownership by the Africans was minimal, as Crown lands were very expensive and legislation was passed enforcing the punishment of trespassing on Crown lands. Many Africans who abandoned the plantations eventually returned to work as independence was no better than working on the plantations. The trend of planters allowing freed Africans to squat once labour on the estates was provided, spread to Tobago as many of the free people who left the plantations rented the land they lived on. This follows the poor state of the lands bought in the rush of liberation. Villages emerged in Signal Hill, Patience Hill, Hopeton, Milford Village and Montogomery “Moravian Establishment’, Bethel, Bethlehem, Black Rock, Calder Hall, Rocky Vale, Monkey Town (Morne Quiton) all became heavily populated. Maison Hall and Mt. St. George were built around the Methodist Chapels and Moriah developed lands bought from Indian Walk estate.[1]Lots sold to freed Africans were usually small, around one acre, or less meaning it was not suitable for families to reside there especially in cases where the small lots of land would be divided and shared among labourers.

The metayage system was developed in 1843 as an attempt to aid the sugar estates in smaller islands like Tobago. It involved the metayer (sharecropper) holding a lot of land and planting sugar cane on this lot of land. The metayer received a percentage of sugar production profits and was also allowed to build a cottage on the estate and provision grounds. In 1847, the sugar industry declined and the widespread bankruptcy among West Indian sugar plantations left the West Indian Bank in failure. The Tobago planters depended heavily on the metayers because of the lack of funding for machinery maintenance and upgrade, labour wages, a constitutional crisis rom 1846-1847 and a hurricane disaster in 1847.

Estate lands were sold at incredibly low costs and this saw the rise of a black planter class where the previously enslaved became land-owners. The peasantry also grew as planters had to sell small plots to peasant farmers resulting in the growth of the peasantry industry of Tobago.  In 1853, the number of metayers in one Tobago district increased from 208 to 500 and the metayage system thrived till 1897, much longer than the other smaller colonies[2].

Black Freedom in a slave society

It is important to mention the presence of Freed African groups in Trinidad before Emancipation in 1838. There were African groups who were free in Trinidad in the early 1800s such as the Mandingo people of Senegambia, West Africa. They were enslaved and brought to Trinidad and were a tight-knit Muslim community who worked hard and saved their money in order to purchase the freedom of themselves and their enslaved brethren, who were also Muslim. This group kept hold of their religious faith and built their own communities successfully. Upon the announcement of the Emancipation Act in 1834, the Mandingo community was proud to have exonerated most of their members.  The leaders of this group were well educated in Africa, spoke multiple languages and hailed from high-status families. This group was known to hold onto their cultural heritage, never abandoning the thought of returning to Africa. The first leader of this group was Jonas Mohammed Bath and record of the group lasts until the mid-1800[3].

The post emancipation period saw mobility of the Africans from the plantations to their own lands and economic independence. The ability to gain independence from the plantation was a major blow to planters across the Caribbean leading to the bankruptcy and failure of multiple estates. The freed Africans, emancipated from slavery, found their footing in a society that was directly and obviously opposed to his right to freedom. The Africans displayed themselves as land-owners, entrepreneurs and skilled farmers amidst the negative label of black people being listless. The National Trust on this Emancipation Day, August 1st 2020, wishes to celebrate the achievements and outstanding contribution of the freed Africans to West Indian society. Indeed, these people who had endured so much, were able to thrive in freedom and the peasantry became the backbone of some of the colonial economies. This period in our past will remain immortalized to remind us of the strength and independence of our ancestors.

Written By Maya Doyle, Research Officer, The National Trust of Trinidad and Tobago

Our African Heritage: Stories of Resistance and Resilience in familiar places. Retrieved July 28, 2020, from https://natt.gov.tt/sites/default/files/pdfs/Our-African-Heritage.pdf. National Archives of Trinidad and Tobago

[3] Our African Heritage: Stories of Resistance and Resilience in familiar places. Retrieved July 28, 2020, from 9https://natt.gov.tt/sites/default/files/pdfs/Our-African-Heritage.pdf. National Archives of Trinidad and Tobago