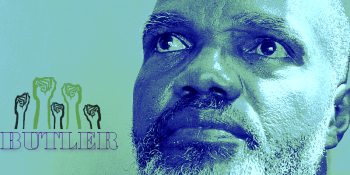 Notwithstanding a bounty of $500 on his head, a strikingly large sum in 1937, Tubal Uriah “Buzz” Butler had successfully dodged capture by the colonial authorities.[i] Neither low wages, unemployment,  nor a contracting economy aggravated by the global Economic Depression could persuade the working classes to turn against their man. In his usual prophetic manner, Butler summed up his raison d’être: “After years and years of weeping and groanings, untold [miseries] and complaining, prayers and petitions, the toiling masses of this colony prayed to the God of Justice and Fair Play, Freedom and Liberty, the God of their ancient and incomparably glorious African forefathers, to send them a leader.”[ii] And so, despite the efforts by the authorities to paint the godsent figure as an overzealous demagogue, the people on the ground loved him.

On May 9th, 1937, Butler uttered words at an address to oil workers which were regarded as inflammatory and dangerous. He allegedly incited the crowd to riot and acted seditiously, encouraging the multitude to resist colonial authority. He was thus to appear in court on June 17th to answer the charges. Disregarding the court order, Butler chose to honour another engagement which he was carded to appear two days later. The authorities, having gotten wind of the meeting in Fyzabad, had planned to apprehend him. A member of the local intelligentsia, or perhaps a daft citizen of the north, underestimated the vexations experienced by oilfield workers, deeming them “Minor labour troubles…reported from South Trinidad”.[iii] Thus, the meeting scheduled for that fateful day of June 19th was expected to be mostly uneventful.

The strike, however, was no ordinary one. Workers broiled with pent-up frustration owing to low wages and the racial injustice that they faced on the job site. These issues were compounded by the broader contexts of general discriminatory practices against the poor Black masses, censorship of non-white thoughts and opinions, and anti-African legislation that proscribed their worship and forms of cultural expression. Then, there was oppressive legislation that struck hard. In 1935, there was the Slum Clearance Ordinance which seemed to obfuscate the reality of stark poverty by “cleaning up” the eastern fringes of Port of Spain. The pauperized masses, whose slum residences were demolished, had to resettle in Laventille or some other part of the country; others had to wait many years to resettle in the “Plannings”.[iv] A large majority faced joblessness or had to survive on meagre wages. The Growling Tiger, one of the premier calypsonians of the period, highlighted the plight of the working classes in his ditty “Worker’s Appeal”:

“Anywhere you go you must meet people sad

They search for employment none can be had

We are not asking for equality

To rank with the rich in society

We are asking for a living wage

To exist now and provide for old age[v]

Even when there was an attempt to mitigate the distress of one section of the working classes, another suffered as with the case of the Bastardy Ordinance which forced paternal support despite increased unemployment in the country.[vi] Poor black folk, it seemed, could not catch a break. Tubal Uriah “Buzz” Butler was one of the few, including the great Elma Francois, who stridently objected to colonialism advocating for systemic reform. Thus, placing trust in their chief spokesperson, participants in the demonstration collectively decided that Butler was to be shielded from capture by any means.

One determined challenger, Constable Charlie King, met his doom after failing to read the mood of the crowd. His death sparked grave concern by the ruling elite which responded in a way to diffuse the perception of its vulnerability. Strike action inspired by the Fyzabad uprising was met with lethal force. Throughout the country, 14 persons were killed, and dozens were injured.[vii]

Further, there was a determined effort on the part of the authorities to erode any positive view of Butler. Even the cleverest calypsonian could hardly mask his support of the Grenadian-born messiah. Most calypsos that paid tribute to Butler, including Roaring Lion’s “Butler the Leader” and “The Riot in Trinidad, were banned. Another calypsonian that faced the wrath of censorship was King Radio who penned the tune “Murder in Fyzabad”.[viii] The title of the song alone would have caught the attention of the censors. Redubbed “How I Were When They Strike” it stated:

And authors in England and America

Because he is fighting for his people wholeheartedly

So his name is recorded in history.[ix]

This sentiment was expurgated for the view of the censors, but the song was banned anyway. 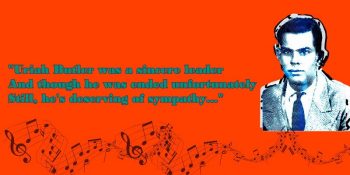 Initially adopting a cautious posture admitting, “I don’t know who is right or who is wrong” and preferring to “reserve his opinion” through most of his song “The Strike”,  Atilla the Hun managed to reveal his support for Butler by wit of paraphrasing:

To use the words of our ex-Governor

Uriah Butler was a sincere leader

And tho’ he ended up unfortunately

Yet he’s still deserving of sympathy[x]

In another calypso which provided his opinion on the Report of the Foster Commission titled “The Commissioner’s Report”, Atilla made even clearer his position on the Fyzabad affair

They said, through the evidence they had
That the riots started in Fyzabad
By the hooligan element under their leader
A fanatic Negro called Butler
Who uttered speeches inflammatory
And caused disorders in this colony
The only time they found the police was wrong
Was when they stay too long to shoot people down

A peculiar thing of this Commission
In that Ninety two lines of dissertation
Is there no talk of exploitation
Of the worker or his tragic condition
Read through the pages, there is no mention
Of capitalistic oppression
Which leads one to entertain a thought
And wonder if it’s a one-sided report[xi]

Not everyone had a positive view of the protests. One-time ally of Butler, Captain Arthur A. Cipriani distanced himself from the Fyzabad strike and its leadership stating that while he was in favour of the demand for better wages, “any talk of excessive increases by reason of the strikes would be entirely out of the question and absurd.” He continued, “The T.L.P.’s position is very clear. . . . We will not countenance or be any party to a regime of ‘hold-ups’ or demands made by violence.”[xii]

The colonial authorities were also not willing to yield to aggressive demands and were prepared to use brute force to quell the disturbances. On June 22nd 1937, a British Cruiser called the H.M.S. AJAX along with four platoons of bluejackets arrived in Trinidad. Another British Cruiser, H.M.S. Exeter, arrived the following day.[xiii] The mere presence of these forces effectively quashed the protests. Yet, the working classes knew where their loyalties lay. Therefore, they continued to protect Butler from the authorities until he took it upon himself to surrender on Monday 27th September of that year.

Butler was sentenced to two years imprisonment but was detained on Nelson island for a total of six years, until the end of the Second World War, due to fears that he would stir up trouble during the volatile period. The war years quieted the fervour of the 1930s and Butler’s influence seemed to wane thereafter. Trinidad and Tobago would not take to the streets to challenge the system in this way again until the era of Black Power. Although his efforts may have been lost to newer generations, Labour Day celebrations at least offers a reminder of his heroism. For his courageous activism, fighting for the basic rights of the common man in a way that no one else dared to, a man of the people he will always remain.