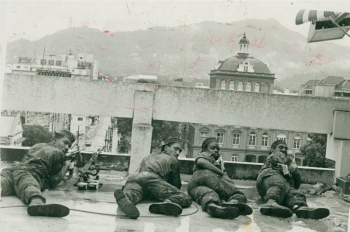 Image 1:TTDF Snipers on the roof of the Hall of Justice training their guns on the Red House during the attempted coup.
(Source: The Trinidad and Tobago Guardian August 1990)

July 27th, 1990 is a date which lives in infamy within the consciousness of our nation. On this day 114 members of the Jamaat al Muslimeen, led by Imam Yasin Abu Bakr, staged a coup d’ état against the Government of Trinidad and Tobago. This six-day assault centred around the Trinidad and Tobago Television Station, Radio Trinidad, and The Red House. Forty-two insurgents led by Bilaal Abdullah stormed the Red House and took then Prime Minister A.N.R Robinson and most of his Cabinet hostage (Commission of Enquiry 2014). This article briefly disccuses the damage inflicted on the Red House during this ordeal.

The Red House is perhaps the most iconic and recognisable landmark in the city of Port-of-Spain. Since completion in 1907, this building has served as the seat of Trinidad and Tobago’s government, for over 100 years. The site upon which this structure now stands was occupied by a complex of government buildings designed by Public Works Superintendent Richard Bridgens in 1844 and completed in 1848(Gerard A. Besson 2012). Those structures were destroyed by fire during the water riots of 1903. Their replacement was designed by architect Daniel Meinerts Hahn to house the colonial government’s Legislative Chamber and other offices. Hahn was the chief draughtsman of the Public Works Department, in his tenure he also designed the Royal Victoria Institute, which now houses the National Museum and Art Gallery, and Queen’s Royal College (Stuempfle 2018). The ornate and imposing neoclassical features of the Red House convey a feeling of authority and prosperity found in few other structures in Trinidad and Tobago.

The unsuccessful 1990 coup is only one facet in the multidimensional history of the Red House. In 1897 the building was painted red to commemorate Queen Victoria’s Diamond Jubilee, and thus became known by its common name. That structure was burned to a husk during the Water Riots of 1903. In 1962 the Union Jack was lowered, and our new flag was hoisted for the first time on its grounds signalling the birth of our nation(Gerard A. Besson 2012). In 2013 archaeologists discovered the remains of an ancient Amerindian settlement beneath structure’s foundations (Reid 2018).

The Red House generally withstood the six-day occupation and siege in 1990 without any severe structural impacts. However, elements of the structure significant to its heritage value were severely damaged. The following is an excerpt from an article written by Camini Marajh for the Express on August 5th, 1990. The report titled “A Tale of Horror and Destruction” recounts the observations made by those who ventured into the structure, specifically the Chamber of House of Representatives, in the aftermath of these infamous events.

“The stairway (leading to the Chamber) was littered with spent cartridges, blood, pieces of clothing… At the top of the stairs, overturned chairs and filing cabinets provide a barricade of sorts. Here, the stench of urine was overpowering. The corridor leading to the library and the Parliamentary Chamber was dirty. Again, more spent cartridges, used teabags, bits of torn bloodied clothing and reports from the Auditor General.

The library was in disarray. Books, Hansard reports, newspapers and other oddments lay trampled on the floor…In the Parliament Chamber itself, the havoc is complete. Had a tornado blown through, the effect would have been the same. Everywhere, there were cigarette paper, guns, ammunition, knives, dirty glasses and jugs, a meat cleaver, walkie-talkie sets, headphones, radios, even a bottle of Savlon and olive oil. On the Members of Parliament desks lay briefcases, scattered documents, cigarette lighters, shoes, dirty glasses and soiled clothing. At the Member of Oropouche, Trevor Sudama’s seat, there was a pair of shoes, one side winged by a bullet. The stench of urine was overpowering here, and the filled glasses and water jugs bore testimony to how the insurgents relieved themselves. The Chamber appeared to be riddled with bullets, and there were gaping holes in some places…Room after room, corridor after corridor, stairway after stairway – the destruction was complete… (Camini Marajh 1990)

Architect Rudylynn De Four Roberts also ventured into the building to assess the damage after the coup. Ms. De Four Roberts commented on the overarching issue of water damage as a long-term consequence of small arms fire within the structure. “Bullet holes from 1990 severely impacted the beautiful “Gesso Work” (plaster-of-paris) ceilings of the House Chamber.” (De Four Roberts 2020). These ceilings were the crowning feature of D.M Hahn’s design. Installed in 1906, these ceilings featured highly decorated mouldings in the shape of fruits, flowers, garlands and other Victorian motifs. The work also contained figures like the blind Lady Justice with her scales in hand. They were the work of an English firm called Messrs. Jackson & Sons the ceiling was made in England in panels and shipped to Trinidad in crates (Besson, 2012). Sadly, the minor damage from gunfire in the Chamber was not quickly repaired, and subsequent leaks eventually led to the collapse of this work of art. 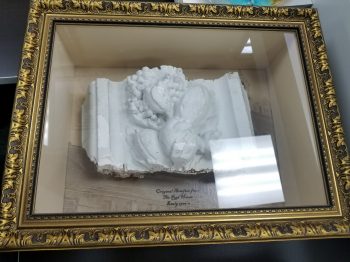 Image 2: A framed fragment of the original gesso work ceiling found in the Red House
(Source: National Trust of Trinidad and Tobago)

The copper dome of the rotunda was also pierced by gunfire in many places causing water to leak through to the central atrium. Attempts were made to patch the leaks, but these efforts failed. Furthermore, glass panels installed within the upper-level arches of the rotunda were also pierced and shattered by gunfire. Many of the slate tiles used in the roof construction were even cracked and damaged during the hostage situation causing more leaks (De Four Roberts 2020). The loss of this stunning architectural detail adds to the painful legacy of the attempted coup.

Apart from the internal small arms damage the Red House also survived a rocket attack from Trinidad and Tobago Defence Force personnel. “On the morning of Sunday, July 29th, 1990, a B300 rocket (bazooka) was fired at the Red House by a group of servicemen led by Major Peter Joseph. The ensuing explosion reportedly caused a small fire, which was extinguished by the insurgents, and left a gaping hole at the southern end of the building on the ground floor” (Commission of Enquiry 2014; Mavrogordato 1996). All things considered; the Red House’s structure endured this assault on our democracy.

The building was assessed and cleaned almost immediately after the insurrectionists surrendered.  However, bullet holes from the attempted coup still could be found in the ceiling and roof when a restoration project began in 2005 under the direction of UDeCOTT. In January 2020 the restoration project was finally completed, and the Red House was reopened as the seat of the Parliament of Trinidad and Tobago. Most notably, the eternal flame lit to honour the memory of those slain during the coup was remodelled and relocated to the northern side of the structure.

The Red House is the site upon which this democratic nation was born and where that democracy overcame an unprecedented challenge. This building is also inextricably connected to Trinidad and Tobago’s political history first as a colony and as an independent nation, Therefore, it must be preserved for the enjoyment of future generations. 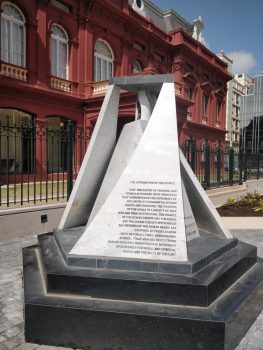 Reid, Basil A. 2018. An Archaeological Study of the Red House: Port of Spain, Trinidad and Tobago.

Categories: Blog - Other Contributors
Tags:
← Contested Heritage in 2020 Voices from 1990 →