‘Jahajin’: Motherhood at Sea during Indentureship

Mother’s Day is celebrated with varying traditions in many countries around the world, at different times of the year, to honour the mother of the family, mother-figures, and the influence of maternal figures and mothers in our society. This article is a tribute to all mothers, past and present, including the mothers who brought their children to Trinidad and Tobago on slave and indentured ships. This is the story of two mothers, the brave Makhani and her resilient daughter Samoondharie.

Makhani left her village in Patna, India to come to Trinidad in 1912 on the ship SS Mutlah. She was 25 years old and pregnant. The voyage must have been difficult, being pregnant on a ship, sharing living quarters and a latrine with many other indentured Indians. On the way to Trinidad, Makhani went into labour and gave birth to a daughter. Like many babies born during the voyage, the child was initially called ‘Jahajin’. ‘Jahaj’ meaning boat, and ‘Jahaji/Jahajin’ referring to the Indians who made the journey on the boat. Her Infant’s Emigration Pass indicates that she was only ten days old when the Mutlah arrived on Nelson Island, Trinidad’s Immigration Depot, on  October 14, 1912. Makhani later gave her daughter the name ‘Samoondharie’, which means “daughter of the sea”.

Makhani’s experience on the Mutlah must have been exceedingly difficult. Her husband, Samoondharie’s father, Baal Mohotam, had been a cook on the ship. Unfortunately, he died before he could arrive in Trinidad and was buried at sea. The ship’s captain and crew did not tell Makhani that her husband had died, they told her that her husband had been sent ahead and that she would find her husband when she arrived in Trinidad. Upon arrival in Trinidad with her new-born baby, she realized that her husband was indeed dead (103FM News Interview). She landed on Nelson Island with an uncertain life ahead, and various new titles, she was now a new mother, a widow, and an indentured labourer in a new country. 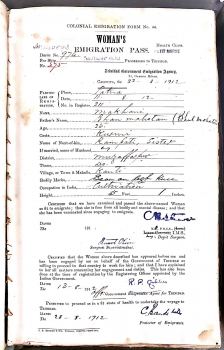 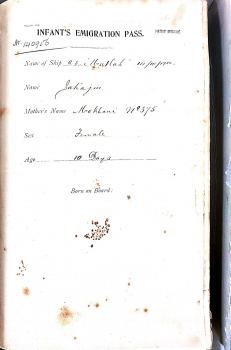 Images of Emigration passes showing the name of the mother and the age of the infant (10 days old) upon arrival at Nelson Island. Source: National Archives of Trinidad and Tobago.

Makhani and Samoondharie’s Emigration Passes indicate that they were assigned to Petit Morne Estate in Trinidad.  Makhani remarried, and Samoondharie’s stepfather was the only father she knew. Samoondharie was married at the tender age of 12 as child marriage was a common practice among the Indian immigrants at the time. Samoondharie had two daughters. She had to work hard as an indentured labourer, from 7 am to 5 pm for 25 cents per day to provide for her family.

Samoondharie Doon passed away at 104 in 2016. She was Trinidad’s last known surviving Indian Indentured labourer.

The year 2020 signifies 100 years since the Indian indentureship system ended in Trinidad. During this month of May follow the National Trust of Trinidad and Tobago as we commemorate a significant anniversary of the Indentureship system. Stay tuned to our website, Facebook, Twitter and Instagram pages for more information as we explore the history of the Indentureship period and sites of Indian heritage.  Happy Mother’s Day to Makhani, Samoondharie and all the mothers and surrogate mothers of Trinidad and Tobago.

National Archives of Trinidad and Tobago

Trinidad and Tobago mark 167 years of Indians in the Caribbean.  https://gulfnews.com/world/asia/india/trinidad-and-tobago-mark-167-years-of-indians-in-the-caribbean-1.1035140