History of the Rio Claro Railway

The first section of the Line opened 120 years ago between Cunipia Farm Junction (Later Jerningham Junction) and the original terminus at Tabaquite.

The idea behind building a railway into the middle of Trinidad in the 1890s was a speculative move by the Colonial Government to sell crown property, encourage settlement, exploit natural resources and boost cultivation of virgin but very fertile lands.

The principal objective, as described by the Legislative Council, was “The opening up of the cultivation of some of the best lands in the Colony”. It was also intended by means of the railway to afford means of transport to the owners of already cultivated lands lying beyond the easy reach of the existing main roads and railways. It was recognised that a railway through the Caparo Valley would not be financially lucrative for many years until the area had further developed. The new line was to be an investment for future prosperity.

The first part of the line was 15 miles 5 chains in length and cost £118,466 (about £13.4M in today’s money). Work began on 26 March of 1896. The line joined the TGR’s southern main line at Cunupia Farm Junction (later Jerningham Junction) and ran in a south-easterly direction through the Caparo valley to Tabaquite.  The Junction was later named after the Governor of the day, Sir Hubert Jerningham.

On 1 January 1898, the Trinidad Government Railway opened a section of the new line from Jerningham Junction to Brasso, a distance of 12 1/4 miles.  The extension became known thereafter as the ‘Caparo Valley Line’. 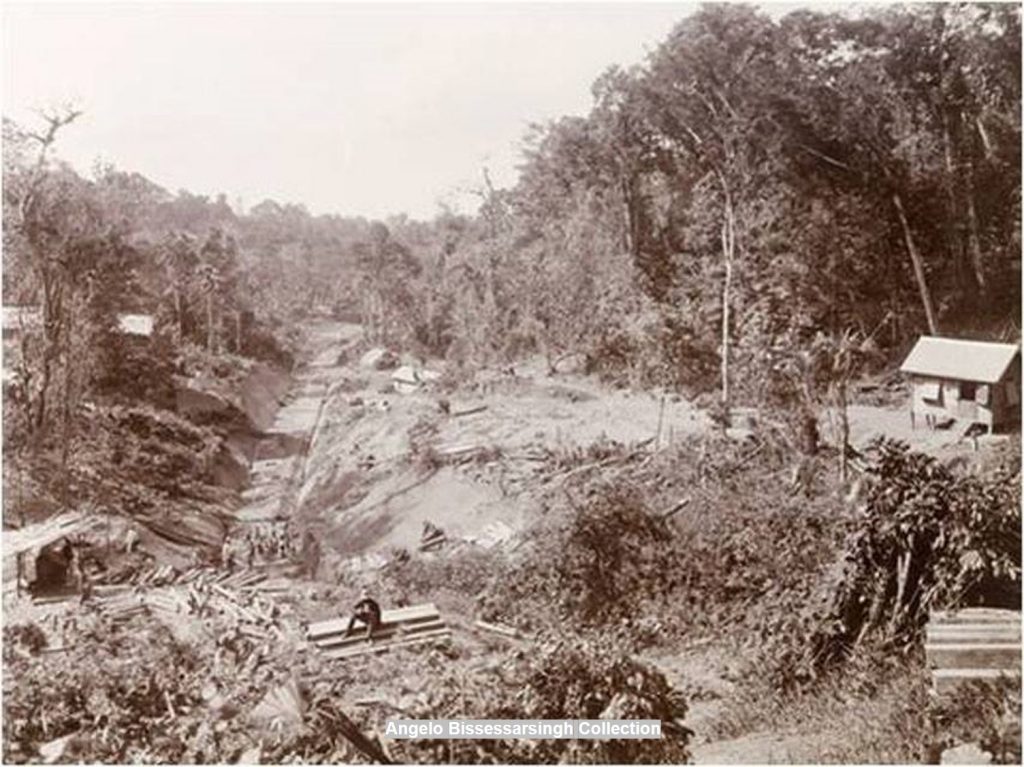 To reach the district of Tabaquite, the TGR was faced with perhaps the most testing engineering challenge in the history of the railway.  A 660ft long tunnel was required to drive the line under a section of Trinidad’s central range, and the centre of the tunnel would be 400 ½ ft above sea level, the highest elevation on the entire system.

The Chief Resident Engineer in Charge of line construction and tunnelling was H. Oliver who first came to Trinidad from England in 1894 for the construction of the Sangre Grande line.

Work on the Tabaquite tunnel started on 26 November 1896 and the average rate of progress for each working day was five feet. The heading for the tunnel was completed on 18 May 1897.

The last stone of the Tabaquite Tunnel was laid on 11 March 1898 by Mrs Fitt (wife of George Fitt, a prominent planter of the day). The Tunnel was opened on 13 August. The following day the railway was operational into Tabaquite station itself.

The line was “officially opened” through the tunnel to Tabaquite from Brasso a distance of 2 3/4 miles on 20 August 1898 by the then acting Colonial Governor of Trinidad and Tobago, Sir Clement Courtenay Knollys KCMG.  It was an historic moment not only for the agricultural communities in the Tabaquite area, but for the people of Trinidad and Tobago.  The tunnel became thereafter known as ‘Knollys Tunnel’ and today it is a national heritage site. 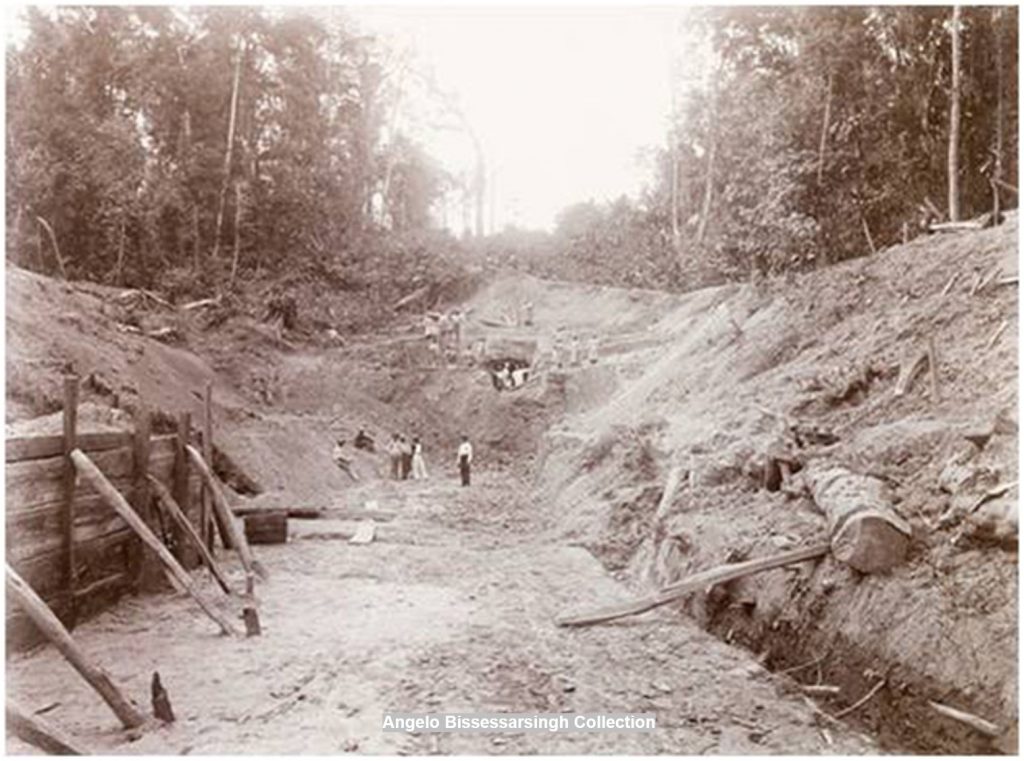 When the line first opened, there were only six stations beyond Jerningham Junction; Longdenville, Todd’s Road, Caparo, Brasso Pierda and Tabaquite. It was originally intended to have five stations, but afterwards it was decided to build another at Todd’s Road, which later turned out to be one of the best paying stations on the original extension.

Flanagin Town as a railway station did not exist when the Caparo Valley line opened to traffic in 1898. It came much later, and its story is a very interesting one which has been largely forgotten today. The town was named after a warden, Clifton Flanagin, who had been stationed in the area since 1899. In 1900, he transferred to a small settlement between Brasso Pierda and Tabaquite. Clifton’s efforts to establish a railway station came to fruition in 1903 when the railway authorities not only agreed to build the station but named it “Flanagin Town” in acknowledgment. Later, yet another station was added at Brasso Caparo, between Flanagin Town and Tabaquite.

The Tabaquite line had not yet been completed as plans for a further extension had already been under discussion.  However, this did not happen for another 16 years.

Proper planning began in 1908 for a line proposed from Tabaquite to the Guayaguayare oilfields. Later the trajectory was revised for a shorter line to Mayaro, via Rio Claro. The former as we now know never materialised, but it was the reason for the birth of the latter as a railway terminus. 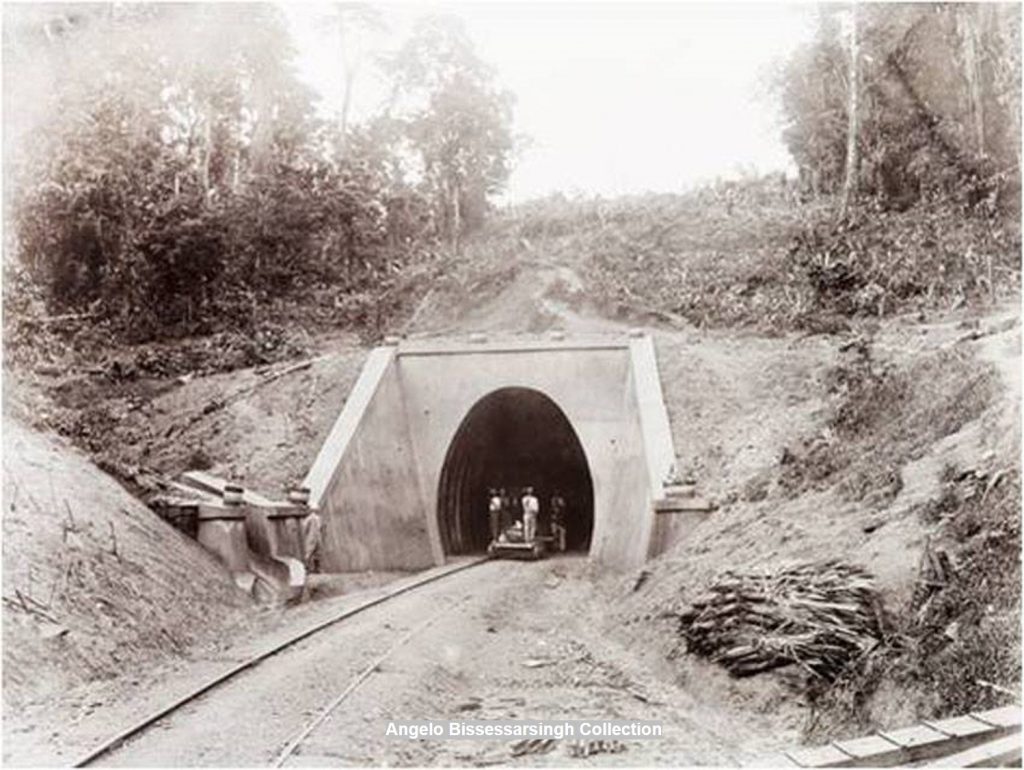 Image courtesy Angelo Bissessarsingh Collection: The northern portal of the Tabaquite tunnel a few days prior to opening of the line into Tabaquite in 1898.

In 1910, the General Manager and Chief Resident Engineer of the Trinidad Government Railways, Horace Richard Marwood made his way to England to discuss plans and estimates with the consulting engineers.  The estimate for the cost of construction already approved by the Legislative Council was £123,708 for a line from Tabaquite to Rio Claro. This estimate was revised to £120,332 12s 7 1/2d following a fresh survey and plans for a shorter, less difficult route. This new route to Rio Claro cut 2 miles off the original trajectory.

The first sod was turned at Tabaquite for the extension of the Caparo Valley line onward to Rio Claro, by HE the Governor, Sir George Ruthven Le Hunte, on the 29 September 1911.

Building started in earnest on 12 February 1912. At first progress was slow not helped by unfavourable weather during the wet season. One can only imagine how much of a challenge it must have been with men and mules having to cart equipment and materials through malaria infested jungles of central Trinidad.

In June of 1913 construction of the last two bridges, No.28 and No.29, enabled continuous “Permanent Way” (Railway line) to be joined up between Tabaqite and Rio Claro for the first time. This helped greatly in transporting workers, equipment and materials to and from the various areas of construction activity all along the line.

It would take another year before the railway opened for traffic. Goods trains began running into Rio Claro during the month of August of 1914.

The Great War was declared on 6 August 1914 and for this reason the Rio Claro line did not enjoy a lavish ceremonial opening as had been the case for the San Fernando to Siparia line almost one year earlier.

On 1 September 1914, there was a special ‘first train’ carrying HE the Governor George Ruthver Le Hunte and a few dignitaries. A toast was made for the arrival of the first train and a passenger service initiated. A post office was opened at the railway station the following month on 1 October 1914. 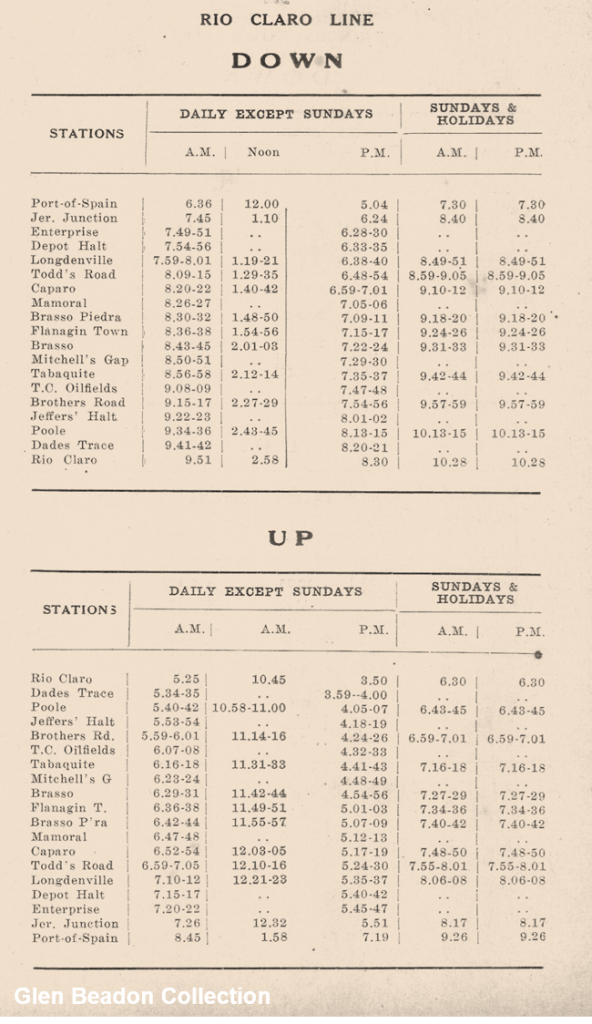 Railway Timetable between Port-of-Spain and Rio Claro circa 1944

The section between Tabaquite and Rio Claro had three railway stations at Brothers road, Poole and the terminus at Rio Claro. Later, in 1922, another new station was added at Trinidad Central oilfields (between Brothers Road and Tabaquite). The line had five main level crossings, 39 culverts and 10 bridges and was exactly 12 miles 71.55 chains in length.

The final construction cost was £155,491 10s 3 1/2d (around £17.1M in today’s money). The new railway struggled in the early years of its existence but came into semi profitability with the growth of cocoa and other agricultural crops in the area as well as the increase in passenger numbers due to population expansion. Things looked to be going as the authorities had first planned. 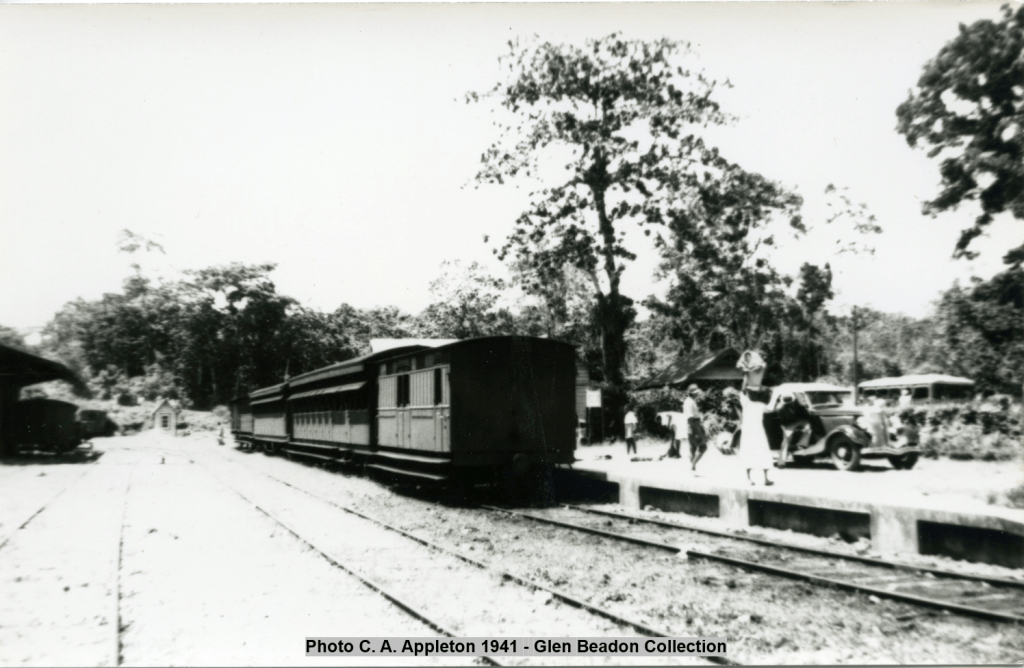 Rio Claro Terminus Station on 28 September 1941 captured by C.A. Appleton from the UK who visited Trinidad that year and captured many similar scenes across the railway system. Note the Goods platform and shed to the left of the photograph with passenger station platform on the right. 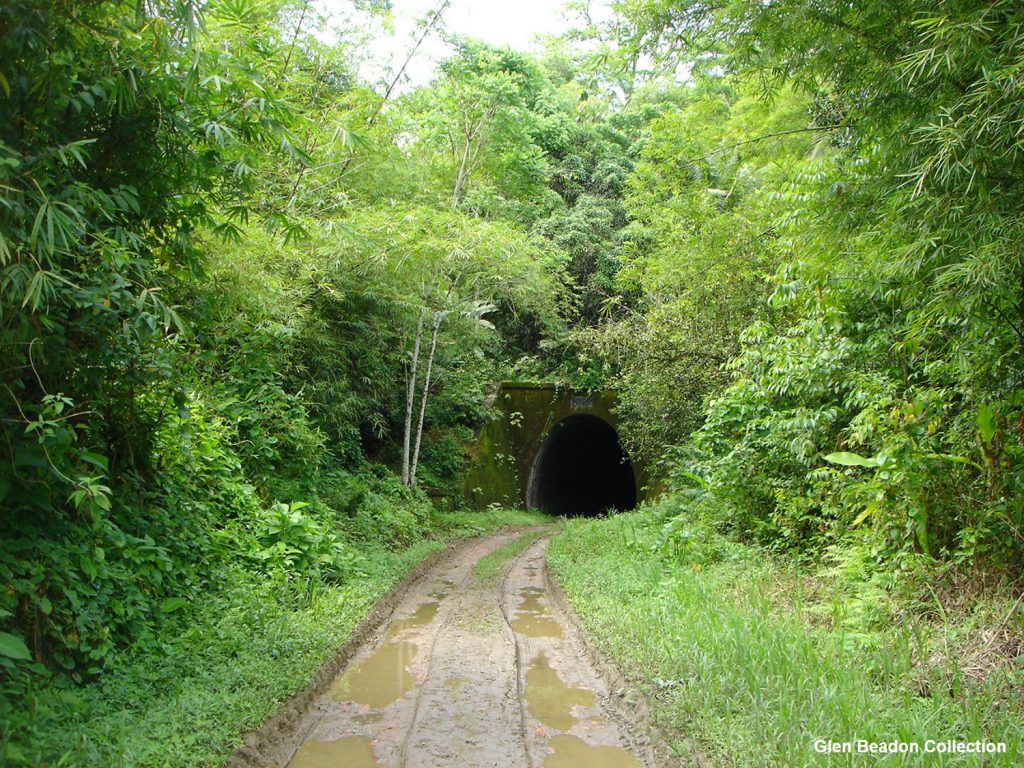 Glen Beadon: Knollys Tunnel through the eye of my camera on 16 July 2009

Ironically, the railway also aided road expansion across the area in great measure by moving road metal and other construction materials. The improvement of roads and the development of the internal combustion engine in the 1920s brought rigid competition to the railway system which eventually lead to its demise.

A note to the TGR Traffic Managers office by J.H.Brooks, Traffic Inspector, on 26 August 1926 effectively illustrates the level of competition experienced by the railway on the Rio Claro line:

District Traffic Superintendent: “I have again to report that the Bus Traffic on the Rio Claro Line is on the increase, with the result that the trains are being worked empty. I travelled on this line on the 24th and 25th at Caparo, Todd’s Road and Longdenville, there was not a passenger taken up or put down. The prices of the Buses are cheaper than ours, hence the reason. Can something be done to get back the traffic?” (J. H. Brooks, Traffic inspector)

The Trinidad Guardian on 11 April 1965 declared “Railway to go in Stages” – Closure of the southern main line to San Fernando and the Caparo valley line to Rio Claro took place, under much public criticism, on 30 August 1965.

The remaining lines of the Trinidad Government railway closed at the end of December 1968.