It’s May and we’ve got two public holidays this month! This blog will focus on the first of the holidays- Eid-ul-Fitr, which is being celebrated on the 13th May, 2021. Let’s take a stroll down knowledge lane and learn all about Eid-ul-Fitr and Islam. We will of course include the built heritage of the Muslim community, by featuring the Jinnah Memorial Mosque.

Islam means submission or obedience to the word of God. I would like to posit that this is an action-oriented religion, which believes in “Peace with God and his creatures, Submission to the will of God, Obedience to God’s commands”.[1]

One who follows ISLAM is called a Muslim. Muslims believe in and follow five pillars:

Anything that is good is considered Islamic (i.e things that are clean and pure). Laymen have said the goal of the faith is the raising of one’s consciousness and the promotion of family values. Note: all activities are either Halal– lawful or Haram– unlawful.

Islam in Trinidad and Tobago

Muslims make up 5% of the Population [2] in Trinidad and Tobago, and there are a number of Islamic organizations operating across the nation. To simplify: Anjuman Sunnatul Jamaat Association (ASJA), Trinidad Muslim League (TML), Tackveyatul Islamic Association (TIA), and the Islamic Missionaries Guild (IMG) were some of the first formal Muslim organizations in existence, in Trinidad. These along with the Muslim Credit Union (MCU), Iqra Productions, Darul Uloom, Islamic Dawah Movement (IDMTT), Jamaat Tabligh, Tobago Muslim Association, Masjid Al-Mumineen, and the Missionary of Darul Ifta to T&T were part of the Muslim Coordinating Committee (MCC). In 1989, a few other bodies formed the Council of Islamic Organisations (CIO) of T&T in order “to continue the process of uniting the Muslims”. On February 6th, 1990 the name Council of Islamic Organisations was changed to United Islamic Organisations of Trinidad and Tobago.[3] All these organizations operate concurrently, heading up schools, mosques, financial institutions, you name it.

I want to encourage you to browse the Islamic Broadcasting Network Trinidad and Tobago (IBN is channel 8 on cable TV) for all things Islamic. Here’s their Facebook page where you can see some of their content and programs. The Islamic Resource Society is a great resource which makes a variety of educational materials available. They hosted a Lecture series for Ramadan, allowing members’ and interested parties virtual access to information.

It translates from Arabic to the festival of the Breaking of the Fast. Eid-ul-Fitr is a time of celebration in Islamic communities all around the world. The experience during Ramadan – the 9th month of the Islamic lunar calendar- involves fasting from dawn to sunset and engaging in good activities such as charity and increased prayer.

Ramadan, like the other months on the Islamic (lunar) calendar, is based on the cycles of the moon. The sighting of the new moon after Ramadan starts a new month called Shawwal (the 10th month) and determines which day is Eid-ul-Fitr. In an interview with a member of the IDMTT, details were given as to how Ramadan is observed by many Muslims. They are required to fast from dawn (even before the sun rises) to sunset. The physical aspects of this involve no eating, no drinking, and no intimate relations. The spiritual deeds include good activities such as charity, increased prayer, worship and reading of the Quran. It is also important at this time (to improve oneself) by avoiding bad things, like time wasting. He pointed out that fasting is both physical and spiritual and that increasing one’s spiritual activities is a form of re-energizing and reconnection to Allah.

The salah/ salat 5 compulsory prayers, is done 5 times every day. It is done daily, year round, inclusive of during Ramadan. It is highly recommended that this be performed in congregation (but Covid has changed this temporarily). This just means the congregation is limited to the members of your household. Lastly, there is the Jummah which occurs at Friday at 12pm and is a compulsory congregational prayer.

Eid Mubarak is the greeting commonly given, and this means blessings of the Festival. To be clear: Eid-Showwal is the10th month and the 1st day of this month is Eid-ul-Fitr. This is a time of enjoyment, fun and happiness, sharing with family and friends. Persons clean and “fix-up” their homes in preparation. Clean fun is what this celebration is all about. Obviously no alcohol, no eating of unlawful foods and no unlawful activity.

Usually there would be an Eid Congregation Prayer at the local masjid, where persons look forward to gathering, to being social and to reconnecting with each other. Here there would be a lot of interacting and sharing on the festival day. People gather for Iftar during Ramadan and for Eid, Iftar boxes (delicious munchies!) are made and distributed.

Located in St. Joseph, this masjid was completed in 1954, after the Trinidad Muslim League (TML) was granted a parcel of land by the colonial government for this construction. Building took place from 1947 and when it was finished the masjid was named the Jinnah Memorial Mosque after the then Pakistani ambassador to the United States, His Excellency Mohammed Jinnah. It was designed by British architects and structural engineers. The mosque received financial assistance from supporters of the TML and its founder Moulvi Ameer Ali, who was also the spiritual leader. 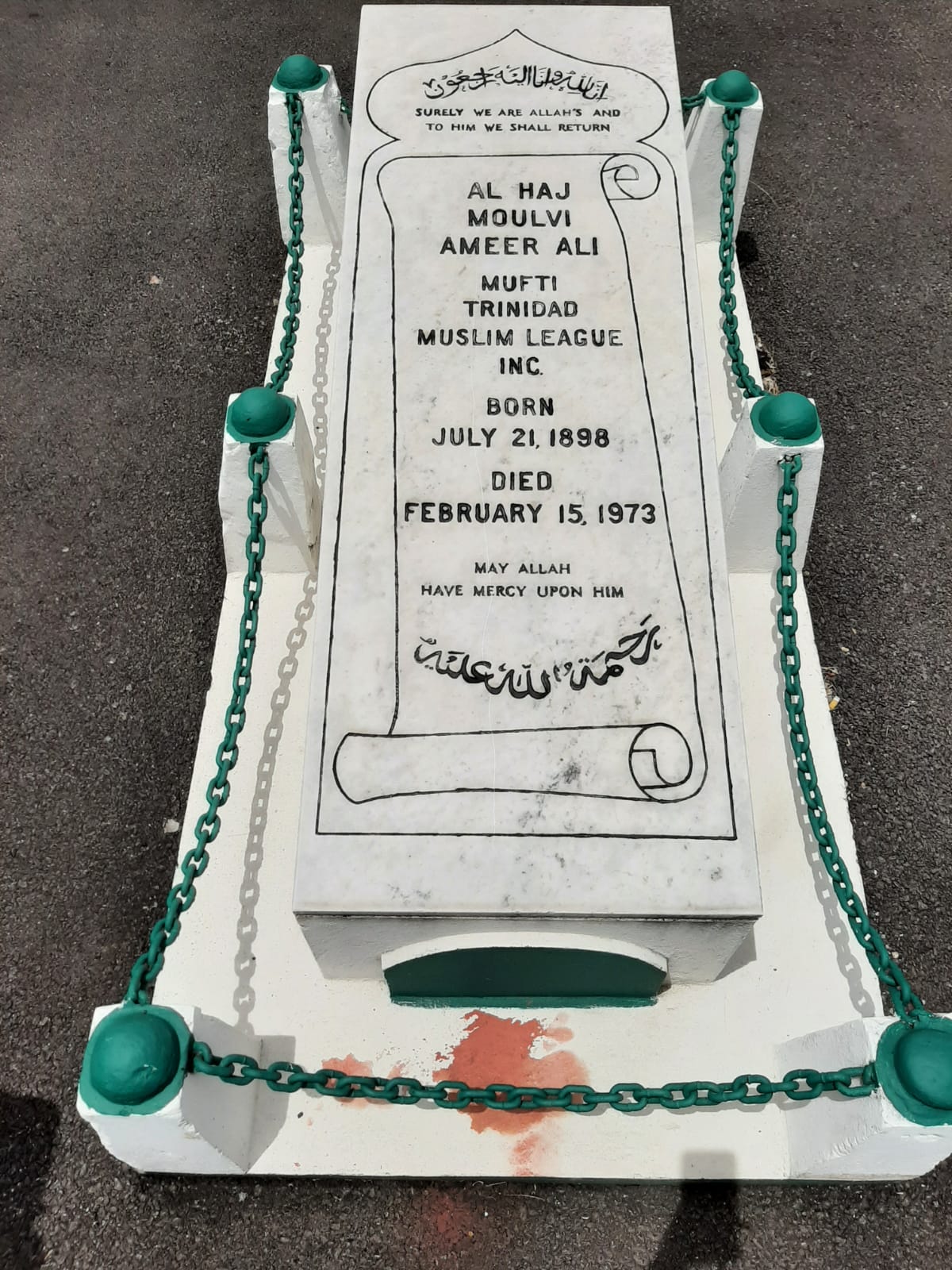 Both the small and large domes atop the mosque form the roof and are supported by two major concrete arches. There are two tall Minarets on the eastern and western ends; these are free standing and can be accessed from the interior of the mosque. The western minaret contains a winding metal staircase which goes to the top of the minaret. From this height, the local congregation was able to hear when the Adan, or “the call to Prayer” was done. Today a PA system is used, for the Adan, which is called five times daily. 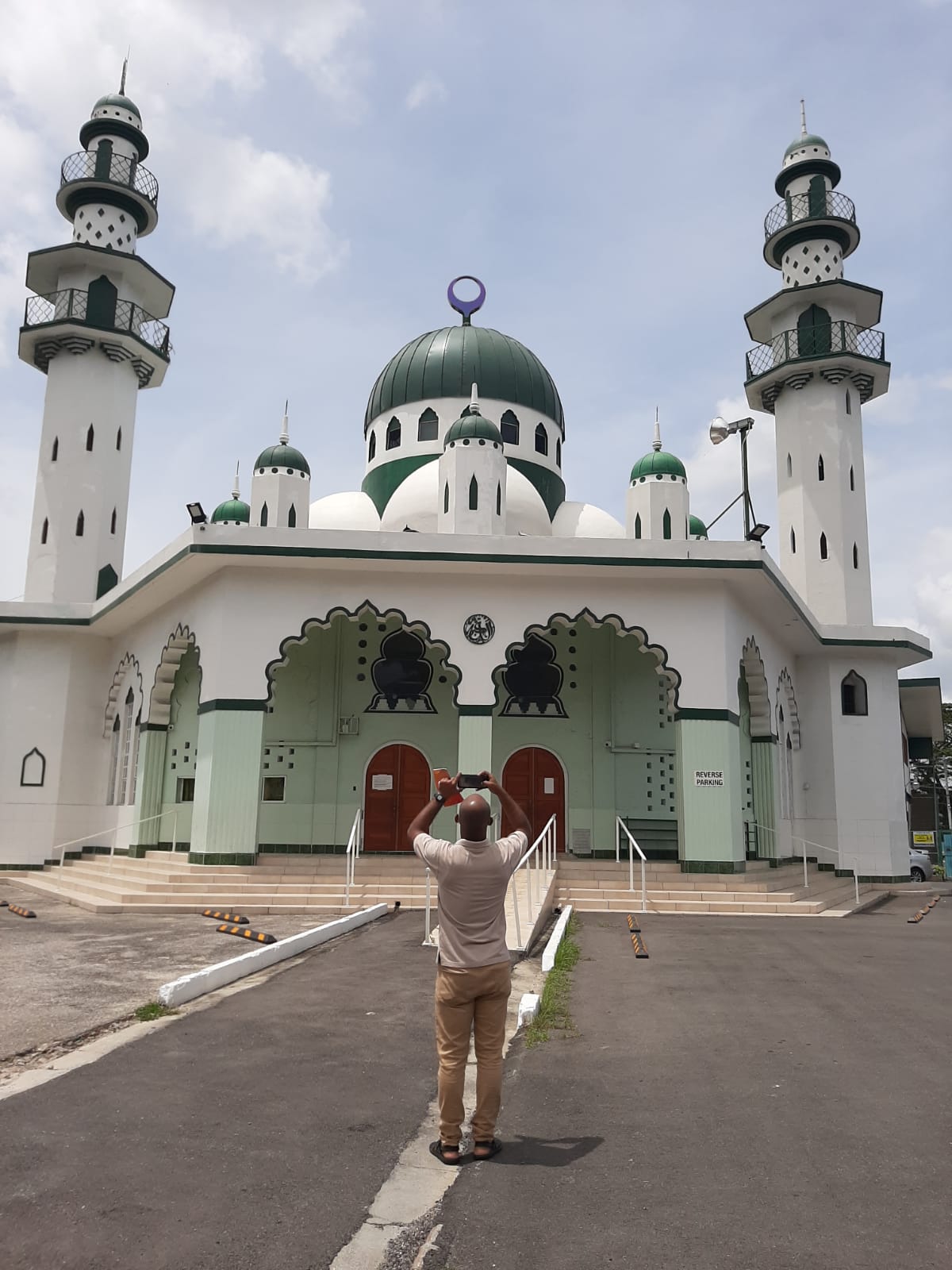 Simply in awe of the majestic craftsmanship of this masjid. Photo by Karishma Nanhu

This masjid is such a scared space, and I am sure you’d like a closer look. Well, no problem- the National Trust will be serving you an exclusive look! The Trust’s has partnered with this TML institution and conducted a Virtual tour of the Jinnah Memorial Mosque. This was a joint Heritage Preservation and Research Department and Education and Outreach Department endeavor, specially crafted just for you. Happy viewing!

Dress code: Who wears Burkas, hijabs, niqabs, tiqiah or not? This depends on the instructions and doctrine of your particular religious organization. This is a very personal decision and a sensitive topic. I humbly suggest that you ask the wearer a question, if you are curious.

Which masjid do I go to? You can go to the nearest mosque to pray.

Do I hear the people saying, “We’re craving to know more about our Islamic built heritage sites!”? Lovely, go read this blog on Islamic heritage assets to learn more. Trust Blogs are a great way to get the conversation started about what’s happening culturally! Be sure to share our blogs with friends and family, so that we can all expand our knowledge of Eid and Islamic/ Muslim heritage in our sweet TnT. This blog is part of a series of blogs that will feature various examples of Islamic built heritage such as mosques and other sacred spaces.

Categories: Blog
Tags:
← The Right Kite The Last Ship and the End of Indian Indentureship in Trinidad →