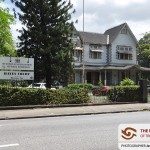 The plan to build a house for the Anglican Bishop was conceived in 1904 by Mr Protheroe. In 1908, an anonymous gift of the site by two gentleman enabled construction to begin. Hayes Court was completed by the firm of Taylor and Gillies in 1910. The new residence was named after Bishop Thomas Hayes who had served from 1889 as Bishop to Trinidad. He died in England in 1904 while preparing to return to the Diocese after a short leave of absence. Hayes Courts’ first occupant was the Right Reverend John Francis Welsh. The building has traditionally been used as the residence of Anglican Bishops to Trinidad. The only Bishop not to reside there was Bishop Arthur Anstey, who arrived as Bishop to Trinidad in 1918. Bishop Anstey was forced, for financial reasons, to lease the house to the French Consul. The funds from this transaction were used to provide church schools in Trinidad and Tobago.

Architecturally, Hayes Court is indigenous in design as was popular at this time, using a combination of French Colonial and contemporary Scottish cast iron elements. A veranda surrounds the building on the north, east and south sides, supported by cast iron columns and decorative cast iron beams. Traditional Demerara windows can be seen on the western façade of the building. Floors are of a combination of imported marble, ceramic and terra cotta tiles. As seen from the exterior, Hayes Court appears to be in a relatively sound state. This is probably because the building has been retained for use as a residence and has been consistently occupied and maintained.

Although not audacious in design, Hayes Court, by its simple elegance, holds its own among the Magnificent and Seven. 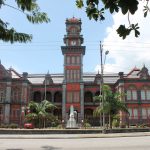 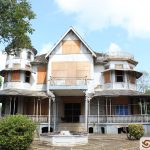