Emancipation: A stifled or rapid exit?

Activities of the Freed Africans in the Post-Emancipation Period. (Part 1)

Emancipation: A stifled or rapid exit?

The Emancipation Bill passed in British parliament in 1833, brought the end of slavery in 1834. However, a new system of slavery commenced. The Emancipation Act stipulated that Apprenticeship was a compromise to plantation owners, as they resented the end of slavery. Under the apprenticeship system agricultural and non-agricultural slaves worked 40 hours per week for their previous masters, in exchange for housing, clothes, food, medical attendance and small wages. On August 1st 1838, the enslaved were finally emancipated from plantations across the British Caribbean.  The newly freed Africans who were previously punished for portraying any form of free will, now possessed the ability to choose for themselves, where they lived, occupation and employer.

Though most of the formerly enslaved would have naturally wanted to abandon the plantations where their traumatic experiences would be immortalized (Beckles & Shepherd 2006), quite a large number of Africans remained on these same plantations. The plantations for some enslaved Africans were places where their hard work, domestic work and culture could be seen. It was also where loved ones were buried. So the emancipation split the ex-slaves into two groups, a group which chose to distance themselves from the plantations and a group that rationally thought of their economic success in their current circumstance. In Trinidad, the formerly enslaved on the Woodbrook estate remained working on Emancipation and were not the only ones to do so.  Only in some countries in the West Indies were slaves able to leave plantations and remain independent. Tobago, Barbados, St. Kitts and Antigua left few opportunities, if any, for land acquisition. However, larger islands such as Trinidad, Jamaica and British Guiana offered the ex-slaves many opportunities.

The difference between the post-emancipation period and slavery, was that the formerly enslaved Africans demanded independence from the planters, by not being limited to one job working on the plantations, obtaining a plot of land where they would be able to cultivate their own food, bargain with the planters on the conditions of their employment and taking their learned skills from slavery and starting their own jobs. Those who still worked on the plantations did so on their time, but did not commit to full hours or regular services. Many of them only resorted to seasonal plantation work, to supplement their income.

Africans who left the plantations occupied plots of Crown lands, obtained through the practice of squatting where they established their settlements and villages. This method of obtaining land came as a direct result of the high cost of lots sold by estates and it was not allowed for land less than 340 acres to be sold. This was one of the many tactics planters used to manipulate the ex-slaves back to the plantations.  Squatting was usually successful because of the lack of proper roads preventing efficient detection by the already simple police force in Trinidad at the time.  By 1851, the number of ex-slaves resident on the estates was a mere 3,116, just about 20 percent of the 1838 work force.

Landlessness of the ex-slaves was a major way planters maintained control of the Caribbean economy, the political process and to assure White social elitism The Caribbean peasantry which was formed after Emancipation represented the depletion of the plantation labour force which led many planters to try to control the availability of land thereby restricting the newly freed population’s access to land. However in larger territories with excess land, their attempt was not successful.

Peasantry communities would sometimes reside near to plantations for close proximity to earn additional wages, and this would usually form a hostile relationship between planter and formerly enslaved, though they remained dependent on each other. After emancipation many freed Africans from the Rose Hill Estate, built up by Edward Jackson, located near Park Street, did not move far and resided on the nearby hillsides which were covered in forest near the East Dry River. Many different African groups settled on these hillsides, the Ibos, Mandingos, Yorubas and Krumen and the area was named Freetown in honour of the various freed African groups which reside there. These groups retained most of their cultural traditions and were segregated based on tribe and religion.

Throughout the area there were various secret groups joined by common ideas. There were ‘malongues’ which were special groupings of people who had shared the experience of the slave ship or the British Man-O-War that had brought them here. These different groups would usually engage in singing and dancing, and their rivalries were resolved through open fights. Many of the freed Africans who left the Port of Spain estates migrated to Laventille, Morvant and Belmont all located near the extremities of Port of Spain[3]. Those in the southern areas of the country migrated to Rambert and Victoria village   just five miles from San Fernando. Villages were also established in Arouca, Tacarigua and D’abadie. 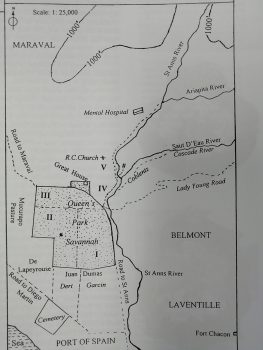 The post-emancipation period proved stressful for planters as they drowned in debt and some went bankrupt. London based suppliers needed to be paid, wages had to be received by labourers. In an attempt to decrease the need for labourers planters looked at mechanization of their sugar factories however, the labour portion of the process still needed to be filled. Financial costs related to maintaining an estate left the planters with no other option than to sell portions of their estate lands to freed Africans and the ‘golden age’ began.

The ‘golden age’ is the term used by Selwyn Ryan in his work, ’Entrepreneurship in Trinidad and Tobago. The Black Experience’ to describe the period after emancipation where the financial situations for some Africans could be juxtaposed to their positions during slavery. The formerly enslaved were called the new “kings” (Ryan, 2010) as some of them became very prosperous as a result of saved earnings from the apprenticeship period. This apprenticeship period afforded some Africans the ability to purchase lots of land sold by desperate masters they once served. Others made their money through learning and using skills learned on the plantations and engaging in trades.

The Colonial officials attempted on many occasions to manipulate the ex-slaves back to the plantations by selling lands near to their estates so they can be assured of a labour force. The planters organised a police force to control the behaviour of the freed by putting ‘in the hands of the of the authorities the formal and informal policing roles that slave owners had exercised in the pre-emancipation period’ (Trotman, 1986). Legislations were also put in place to regulate ‘huckstering, peddling and hawking’ and were also written so arbitrarily that those Africans who were working, preferably on plantations were the only ones excluded from persecution. Though the system was against them, the freed Africans were able to make strides in, labour and retail, at their feet, and large expanses of Crown lands in Trinidad with low security.

The ex-slaves engaged in multiple economic activities in order to earn income. Women and men involved themselves in huckstering, hawking and peddling which were popular activities in West Africa, so it was continued in the Caribbean. Hucksters would be seen walking up and down the streets of Port of Spain selling, fruit, flour, salt, porter, wine, tobacco, brandy, ready-made clothes and any crop or fruit in season. They also found profits through the service sector, by learning skills and became artisans, craftsmen masons, joiners, carpenters, smiths, saddlers, shipwrights, shoemakers and women usually became washerwomen and also partook in huckstering and peddling. Others became shopkeepers in various towns.

Through these occupations, the newly freed were able to obtain moderate wages for 3-4 days of work for 5 to 7 hours per day. Africans were labelled dependent and lazy by the Colonizers Stephen Hamer, an overseer of various coffee estates in Jamaica, said  that black people ‘will lay down under their plantain trees and sleep sounder than work for fair wages’. This was a consistent attitude of planters resisting emancipation, however, as demonstrated in the rise of the peasantry, communities were built by the freed Africans, utilising their earnings and their skills in order to create a new way of living for themselves and their families.   Amidst these baseless labels, their rebellious actions during slavery and their drive to self-representation and ownership in the post-emancipation period, depicted Africans as independent, driven individuals skilled in land-ownership and entrepreneurship.

“There is no “shame” involved in the choice which was made by the freemen. They had selected of their own free will a life of independence to one of servitude, and the choice ought never to be urged to his detriment or represented as his shame…In the lamentation that the “negro won’t work”…in the majority of cases, the cry was an ebullition of selfish disappointment.” – William Sewell, The Ordeal of the Free

Written By Maya Doyle, Research Officer, The National Trust of Trinidad and Tobago

Our African Heritage: Stories of Resistance and Resilience in familiar places. Retrieved July 28, 2020, from https://natt.gov.tt/sites/default/files/pdfs/Our-African-Heritage.pdf. National Archives of Trinidad and Tobago